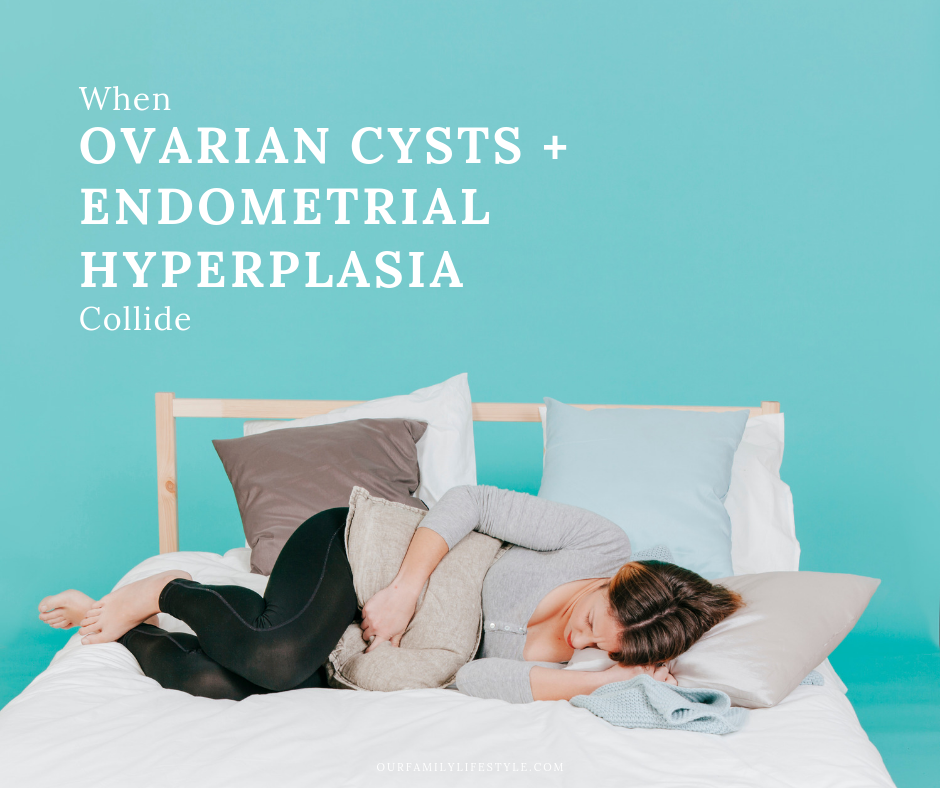 Let me preface this by making sure you understand I’m not a doctor. I don’t even play one on TV. I DID want to be one since I was a child and was even a Pre-Med major in college.

So, I know you’re probably tired of hearing me talk about my female problems. Guess what?! I’m tired of having them!

But, the reason I write about them is not for sympathy, but to share what I have learned.

Why? Because as I sit in bed or in a hot bath or on the toilet, trying to find some sort of relief, I’m taking note of my situation.

And, because I have a platform here for sharing, it’s what I’m doing. Keepin’ it real and hoping that I can help at least ONE of you out there going through a similar situation.

You may recall me telling you about my twin ovarian cysts a few weeks ago. A burning on the lower right side of my back, coupled with lots of pressure in my hip and a missed period told me something was amiss.

A transvaginal ultrasound with my Gynecologist showed two good size cysts on my left ovary, hence all the issues.

At that time, my endometrial layer inside my uterus was 7.4 mm (along with another much smaller cyst). My doctor believed that would flush away with my next period.

Y’all, my next period lasted for 10 days and I was bleeding far beyond the norm. I lost a lot of blood over that week and a half. I was sure that my layer was flushed away too.

Abnormal bleeding was definitely my next sign something was very wrong.

I went back to the doctor for another check-up and we discovered there was now a third ovarian cyst. This was in addition to the small one still inside my uterus and lots of endometrial lining.

Like, way too much of lining. It now measured over 11.2 mm. Considering I had now had another period since my last visit, this was not a good sign.

After an endometrial biopsy (that was not painless at all), I was diagnosed with Simple Endometrial Hyperplasia.

That brings us to now. To today where I am currently dealing with the effects of both the cysts and the hyperplasia.

At first, my doctor said there would be some bleeding from the biopsy. I spotted for almost 5 days. That was pinkish in color.

He prescribed the mini pill to help with the endometrial hyperplasia, and, again, warned me that it could cause some spotting.

Upon starting the pill, the spotting transformed into a deeper red and was a bit heavier.

The day before I began my third week of pills, a period started. That’s where I am now. Nearing the end of that third week.

Can I be honest?

I remind myself often that it could have been worse. I could have tested positive for cancer. They tested for so many and one could have showed cancerous cells.

Therefore, I’m grateful for that.

The pain this time is ridiculously intense. In addition to the burning in my back and hip, there are sharp pains down my left leg.

I had a migraine that lasted almost 4 days and kept me in bed for almost as long.

The stomach cramps are some of the worse I’ve ever had. I want to double over in pain, but that hurts worse. Lying flat with a heating pad seems to help a little.

Perhaps the worst part is the bleeding. I honestly can’t get too far from a bathroom. I’m passing large clots and all my “parts” are sore.

When I stand, I have to immediately fast walk to the bathroom holding my legs together as I go.

I *may have* taken a picture of the blood flowing down my legs on one occasion when I didn’t walk fast enough. (This was only to show Colby because my anxiety often makes me think people don’t believe me).

I’m pretty sure I’m anemic at this point from the crazy amount of blood I’ve lost over the past week.

I’m extremely weak, very fatigued, get lightheaded and dizzy when I stand or sit up too long, my skin is pale, have trouble catching my breath, brain fog, and my heart races after the short walk to the bathroom from my bed.

I haven’t left the house in 7 days. I can’t stand for too long and I’m taking Ibuprofen around the clock to help deal with the pain. This, of course, in addition to my birth control poll, Vitamin C and an iron supplement to try to counteract the anemia.

For the record, I hate taking any medication (even for migraines). So, if I’m willingly taking and/or asking for medicine, it’s bad.

Fortunately, Colby and I were able to get most of our Christmas shopping done while sitting in our bed with laptops. A little retail therapy can sometimes be good for the soul.

I felt accomplished at least being able to do that.

I’m hoping the symptoms improve soon and I’m just going through the toughest part right now. You know, “it gets worse before it gets better.”

I’m still battling depression. My mom‘s birthday is this week (the 29th) and that still gets me. It will be her second one in heaven.

Then, of course there’s Christmas (always her favorite holiday) followed by the arrival of our first grandchild. As excited as I am about Riley’s birth, I still can’t help but feel a bit of sadness that my mom isn’t here to share it with me.

Anyway, all of this to say, I hope at least one of you is able to walk away after reading this with some sort of answers to what you may be feeling.

And, if that’s YOU, I’m so sorry you’re dealing with this too!

I pray it ends soon for you and we can both be healthy on the other side of this.