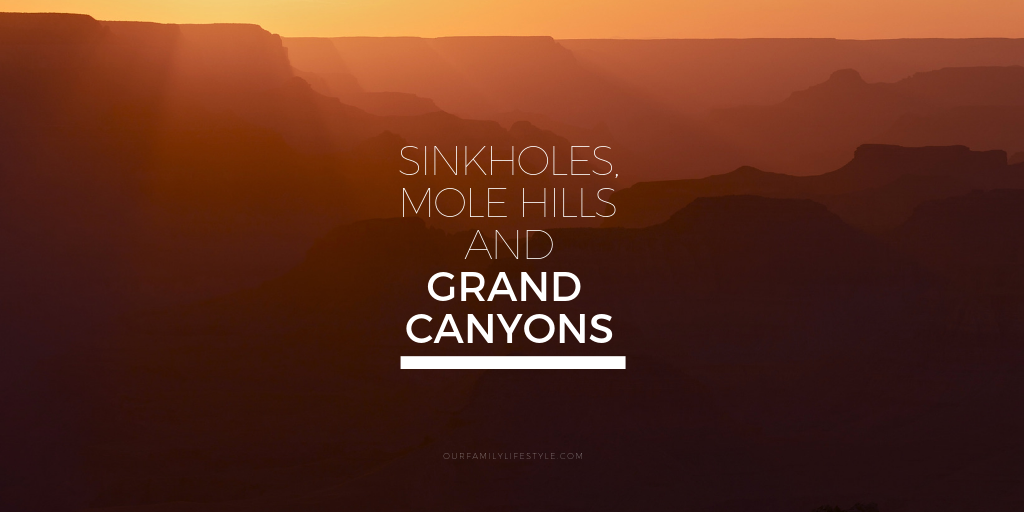 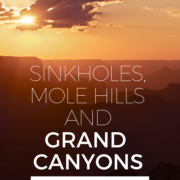 Jaden, our 15 year old, and her friends have weekly dinners together. During the mealtime, they discuss different aspects of their week, including their “sinkholes, mole hills, and Grand Canyons.”

She loved the idea so much that she has us doing it now.

For the past couple of years, the question at our dinner table has been centered around our highs and lows for the day. Jaci, our 13 year old, often leads that conversation.

So, as that conversation covers our day-to-day, the aforementioned covers our week. It’s easy to incorporate both.

As 2018 came to an end, Jaden asked us about our sinkholes, mole hills, and Grand Canyons for the year. First let’s explain each one:

Colby spoke first and it was as if he was reading my mind. Apparently we both had the exact same feelings on the events of our year. I guess we’re still pretty compatible in the marriage department.

He started with the sinkhole, which was equally terrible for both of us. November. The month I had my biopsy, three ovarian cysts, and endometrial hyperplasia.

The month where I lost so much blood in a span of 12 days that I was left extremely weak and dangerously anemic. As horrific as it was for me to go through, it was equally hard for my family to watch me be so sick.

Not to mention, because I was not able to work much, our fourth quarter was pretty dismal and left us financially strained coming into the holidays and new year.

Praying we don’t have a repeat of that month. (It’s so bad I don’t even have real pictures to share from the month.)

Next, the Grand Canyon. I think we all agreed on this one. December. It’s hard to top the birth of a baby.

We welcomed Riley Mae into our family just after midnight on Christmas Eve. After 37 hours of labor, we were more than ready to meet our newest family member.

She was the hope we all needed coming off a rough 2017. And, Colby and I discovered pretty quickly how truly amazing being a grandparent is!

As for the mole hill, it was a little tougher to decide, but I think most of us agree that it was May. It was our busiest month, and although it was full of goodness, there was plenty stress involved as well.

First, May was the month we found out about Riley! Best news of the year! Then, Colby, Cheyenne, Nic and I ran the Silo District Marathon (5K) with the other four there to cheer us on.

A week later, Cheyenne and Nic graduated from college… and announced their pregnancy to the rest of the family. And two days after that, we left for Turks and Caicos.

For some reason when we planned everything, it didn’t seem that crazy. But, in the midst of it all, especially with Chey in the midst of the morning sickness phase, things got hectic.

But, we made it through and walked away from it all with some fantastic memories. Together, all 8 of us, we did it. We’re typically pretty good at that.

Not to mention, now we’ve got one more added to our numbers… and there’s power in numbers, right?!

As you reflect on 2018, what were your sinkholes, mole hills, and Grand Canyons?