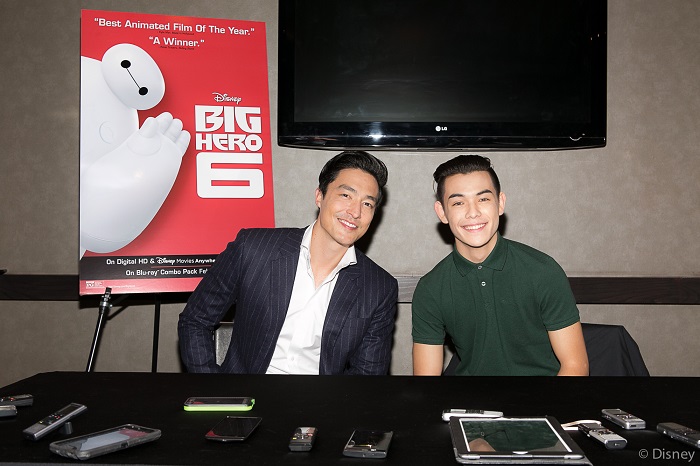 It probably comes to no surprise that a large number of kids out there dream of being in a Disney film one day. To become one of the characters they have grown up watching. This dream pretty much came true for Ryan Potter when we landed the role of Hiro in Big Hero 6.

Ryan Potter grew up reading anime and manga during his childhood years in Tokyo. Upon moving back to the United States, he began reading Marvel and DC comics.

Like many of us, he dreamed of being a superhero. Playing Hiro allowed him to revisit his childhood and he felt he was given the opportunity to “re-live that part of [his] life in a very honest way.“

In fact, he told us that it still hasn’t hit him. Even though he has been blown away by the experience, the reality and magnitude of his role in the movie has still not set in.

Ryan calls the movie a “wish fulfillment” and considers it an honor to be the first multi-ethnic Disney character. Hiro breaks the mold because the “diversity makes [the character] stand out.”

Of course, he also felt like he wasn’t really playing a character. Ryan felt as though playing Hiro was nothing more than being himself.

He walked into the room simply being himself and living in the circumstances his character was facing. He even mentioned revisiting a few things from his own past in order to act out the emotional parts of the movie… and then leaving feeling refreshed.

As though his session in the sound booth was a form of therapy and he could purge things.

Daniel Henney, who plays Hiro’s big brother Tadashi, also felt as though he was very similar to his character. He often found himself staring back at Tadashi in the mirror with his cardigan and baseball hat on.

But his character did more than mirror his fashion sense.

Tadashi played a small part in the physical aspect of Big Hero 6, but emotionally he made a huge impact. I asked Daniel if he felt as though he was changed because of his character,

“He’s made me a better person. He really has. Living in this world, we get caught up in things and sometimes it’s hard to appreciate every moment like everyone preaches. And it’s hard. Then, it was a beautiful opportunity for me to go and play this guy who is a role model more than a man should be at such a young age. He is so smart, beautiful, intelligent, caring, genuine… the ultimate big brother… and he’s very selfless.”

Daniel mentioned walking out of the sound booth ready to “tackle the world.” He was smiling as he left and went about his day.

Overall he felt as though Tadashi helped mold him into a better person. He describes it as a “whole other beautiful experience… bigger than anything [he]’d done before.”

As far as the relationship between Daniel and Ryan, you can definitely tell they have a special brotherly bond. They met for the first time on screening day.

As soon as Ryan arrived, Daniel felt the need to gravitate towards him and they felt an instant need to connect.

They shared similar backgrounds as well as the experience, so a big, organic hug just seemed right upon their initial meeting.

Being a fan of science and robotics, Ryan agreed that Big Hero 6 celebrates both but the true meaning of the film goes much deeper:

“It celebrates being an outstanding young man and having high morals or being a strong independent woman. It celebrates simply being yourself. And the science and robotics comes along with that. But I’m happy that a film like this is being made so that the kids can see that whatever you’re into- whatever obsession you have – carry it out.”

The movie celebrates freely expressing your interests and both Ryan Potter and Daniel Henney did an amazing job in portraying that.