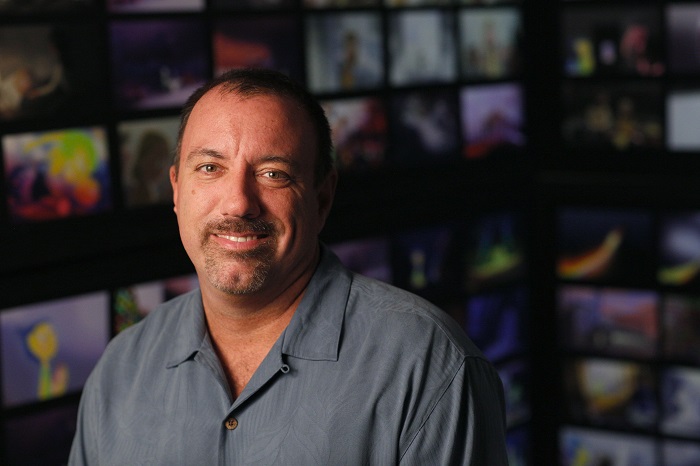 Have you ever thought about how Pixar takes story ideas and makes them work on the screen? During a recent trip to Pixar Studios, we met with Production Designer Ralph Eggleston and took a look at the world and characters inside Riley’s mind in the upcoming film, Inside Out.

In true Pixar fashion, as set forth by John Lasseter, there was plenty of research done during the development stages of Inside Out. There were neuro-scientists brought in to elaborate on the “well-educated guess” that is the world of our minds. After all, the animator’s biggest challenge as they began to work through the story was to determine what the mind looks like. Not the brain. The mind.

Additionally, once they discovered how the mind looked, how were they going to communicate it to us, the audience, in an entertaining way? As an intellectual concept, this was a tricky task. The team knew they wanted to us elements from the physical aspects of the brain, but didn’t want it to get too “squishy.” In essence, it needed to make sense as far as how the mind works and how memory is stored. Using photos of the neurons in the brain, they developed what they perceived as Riley’s mind.

It was actually the “organized confusion” within these photos that gave them their first clues for long-term memory. Wanting this world to be vast and similar to that of a maze or puzzle, each area of the mind represented another challenge as the production team worked to create this 11 year old girl’s mind.

Their next step was to decide on the real world component. With an idea on how to begin developing the mind, the needed to distinguish a wide contrast between each of the two worlds represented. Therefore, they were able to break down the differences enough to visually transition from one world to the other in front of the audience.

It was important that the audience know immediately which world they are visually to avoid confusion. The first thing an audience responds to is visual references on the screen, followed by the sound and, finally, the story. Of course, the story is most important so everything must work together to fully support that.

As Riley moves from Minnesota to San Francisco, you can notice the desaturation in the scenes. Whereas the patterns in her home state of Minnesota denote comfort, the criss-crossed lines and silly signage in San Francisco bring confusion. Headquarters within Riley’s mind becomes a source of light, similar to the sun. As the world inside Riley’s mind continues to reflect how she is feeling on the outside, you will see this concept progress through the movie.

Ralph Eggleston actually said that Inside Out was the longest film he has worked on at Pixar Studios. Whereas most films take 3½ years, this one took 5 ½ years. He contributed the length to the fact that they were, in essence, telling two films at once: Riley’s story in the real world and the mind world. If you changed one little element of the mind world it affected the real world… and vice versa. So there were changes that had to be made along the way to accomodate both worlds. He said it was a little complicated to keep track of when even something as simple as the time of day had to match in both worlds.

Not to mention, just a few quick fun facts he shared:

Ralph Eggleston posed the question, “What is reality anyway?” and answered with this:

“Reality is nothing but a collective hunch.” – Lily Tomlin

See how it comes together in Pixar’s Inside Out when it comes to theaters on June 19th.