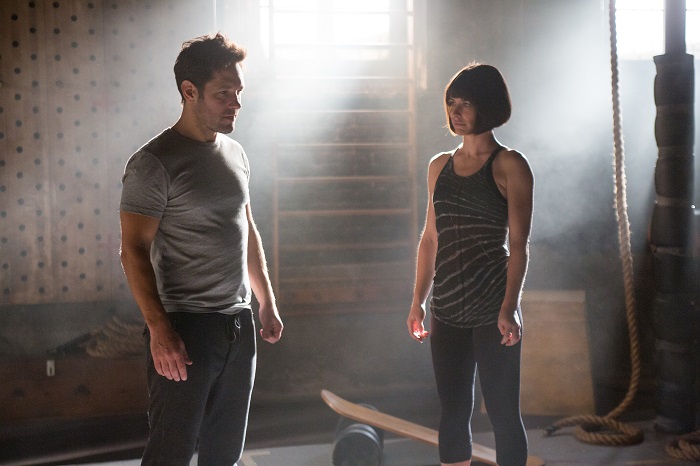 From the moment Paul Rudd and Evangeline Lilly walked into the room, there was a refreshed energy. They were both delightful to talk to and had a genuine friendship chemistry between them. They laughed and talked to us as though we had all been best friends forever. Over the next 16 minutes with them, we learned more about Marvel’s Ant-Man and simply had a great chat.

Their personalities were immediately shown when Evangeline Lilly, 7 months pregnant, mentioned feeling like we should have a turkey dinner laid out on the table. Whereas Paul Rudd thought the “biggest game of poker in the history of poker” would be more appropriate. Our conversation started with this level of humor and continued throughout our time together.

In fact, Evangeline told us that Paul Rudd did not stop improving and cracking jokes through the entire time they were filming. She also admitted there wasn’t one scene where Paul didn’t make her break character. She would be unsure if she was supposed to riff with him or simply “shut up and let [him] do his thing.” In fact, again, according to Evangeline, even Michael Douglas could riff an improv. She may have felt a bit out of her element, but I think she pulled it off well.

Speaking of Michael Douglas, the man is pretty much a cinematic legend. When we asked what their most memorable moment was, both mentioned working with Mr. Douglas. During an emotional scene with Hank Pym (Douglas), Evangeline (Hope) found herself “attached to the project” and realized how amazing it was.

“It wasn’t until I was working with him… witnessing the sort of magic that is the legend of Michael Douglas and what he brings to a film set and how he performs and what he does to the energy in the room when he performs… that made me suddenly sit up and take notice and go, Oh my God. I’d better bring it. I’m working with Michael Douglas and he’s a living legend. That was an honor.” – Evangeline Lilly

For Paul Rudd, the sentiment was pretty much the same. He mentioned that every scene working with Michael Douglas was “acting royalty.”

In addition to mentioning his co-stars, Paul also talked about walking onto the set in the Ant-Man suit for the first time. He “felt like he was 10 years old” and was simply in awe every time after that. The part he will always remember was when he walked on set and everyone stopped at the sight of seeing Ant-Man for the first time. It was “totally exciting” and will be a memory forever etched in his mind.

With 4 daughters, I had to ask Evangeline about the “girl power” role she plays in the film. Paul and Adam McKay worked together on the writing (hence the hilarity of the movie) and Evangeline was able to give a bit of advice along the way. Although, she did NOT contribute to the girl power part. She said “that was Marvel and the boys.” She added,

“I think a lot of the times what happens mistakenly in men’s very, very meaningful attempts to make strong women is they make them strong in the way that they relate to, which is wrong. I think that female strength has many more dimensions than that. I think that a lot of our strength comes from our women’s vulnerability, our compassion, our maternal instincts… and I don’t think that those things should ever be labeled as weaknesses. “

Yes! And once you see Hope in action in Marvel’s Ant-Man you will see just how well Evangeline Lilly infused that statement into her character.

Finally, the parent/child relationship in Ant-Man is incredibly apparent and a resounding theme throughout the movie. As Evangeline put it, “I think redemption between father/daughter and the father/daughter relationship is the powerful theme that really anchors the film emotionally.” Paul agreed and brought it home when he mentioned how we all, as parents, have “bumpy times” in our relationships with our parents or child and can relate to this idea. Redemption.

Basically, Paul Rudd summed it up in this:

“…this whole thing with parents and children, that that was going to really be the thrust of the film. And that’s relatable and empathetic and something that you can hang the whole thing on. And that’s pretty dramatic.”