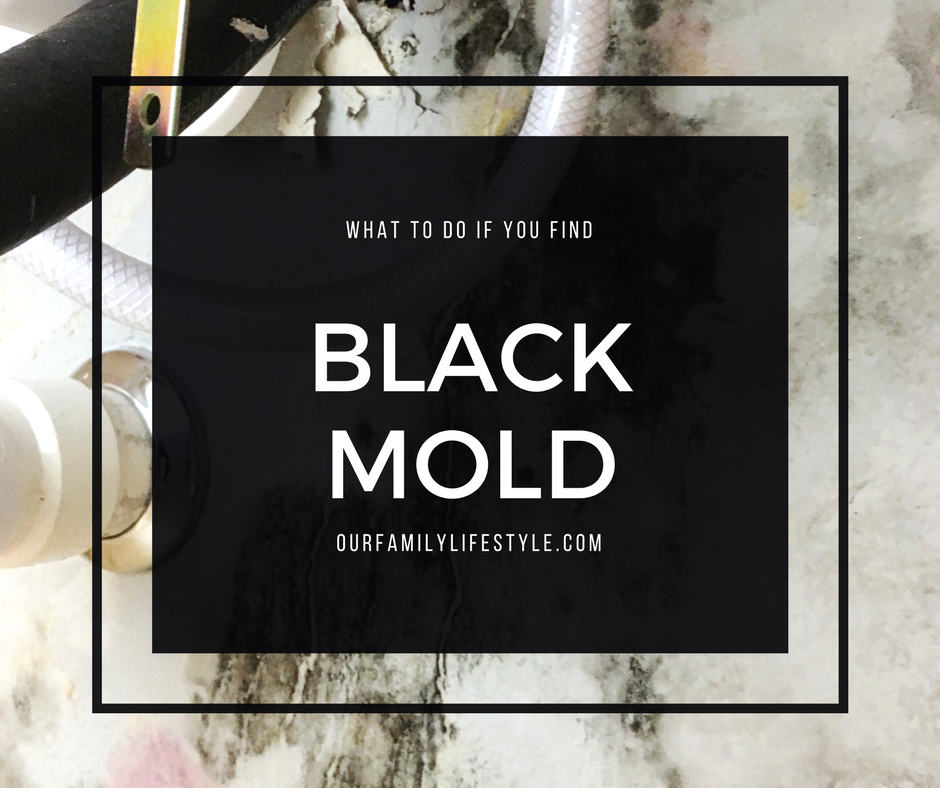 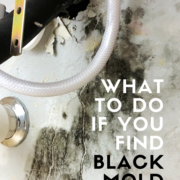 I have to admit, when we first moved into our new house I really wasn’t in love with it. It felt foreign and just didn’t feel like “home.” Believe me, even I was surprised.

Not to mention, I knew all of its imperfections. The twisted studs behind the walls, cracks in the garage floor, and arches that have obscure shapes.

These were the “little things” that we had fought Bloomfield Homes to correct during the building process that we simply gave up on. The frustration of the flawed methods of construction had built up to the point where it was no longer joyful.

Our contractor through Bloomfield was less than satisfactory.

Then, less than three weeks in the house, Jaci began noticing an unfamiliar smell in her bathroom.

One night as I was tucking Joeli into bed, Jaci called me into the bathroom. She opened her cabinet doors and asked me to look inside.

As I bent down to take a look, I was surprised and shocked to find black mold growing under her sink.

In our BRAND NEW house.

Y’all. I was about to lose my mind.

It was the day before Easter and we had all of Chey’s in-laws coming over to celebrate in our new house. I went downstairs to tell Colby what we found in the bathroom and noticed water dripping from an outlet in our mudroom.

Water. Coming out of an electrical outlet.

Let that sink in.

I hardly slept that night. I was afraid to. I had all these thoughts of what could possibly go wrong. The worse, at that moment, was our house going up in flames.

So, not only was I livid about the entire situation our Bloomfield builder put us in, I was worried about the safety of our children. There were so many possibilities running through my head on what could go wrong.

My anxiety was at an all-time high.

The following day, Easter Sunday, we spent celebrating with the family and hiding our stress over the situation as best as we could. We were afraid to turn on the air conditioner (after discovering it was the condensation line causing the leak), so apologized profusely to our guests.

We simply told them we seemed to be having HVAC issues that would be checked out the next day.

That Monday, I was done dealing with our contractor.

I had Colby call the President of Bloomfield Homes. We were both amazed at the fact that not only did he pick up the phone, he also brought in their VP of Operations, listened to everything we had to say about the black mold on our walls, and then made sure that the ball got rolling quickly. (At least he did this right).

Our Bloomfield Homes contractor let us know we would have a team of general contractors coming out the following day to begin their process to get rid of black mold.

Basically, more of his team, the original team that caused this to happen. No. We insisted on a Health Inspector per a suggestion from my dad. We then received another message later that a Mold Remediation Service would be coming to the house first.

See what happened there?

Our contractor wanted to bring out a construction crew to just tear everything out and start again. Who cares if there’s black mold in your walls?! We’ll just tear out the parts you can see and replace them.

He said they could throw up some plastic sheeting around the bathroom, bleach the affected areas they couldn’t easily access, and begin working on the mold removal.

The mold remediation service used their technology to trace the moisture/mold from the upstairs bathroom to the closet under the stairs and into the mudroom.

The water had found its path of least resistance and followed it until it got to that electrical outlet and, after pooling around the plug, began to pour out into our mudroom floor.

The black mold was literally climbing through the walls right in the middle of our Bloomfield floor plan.

He then began the process of cutting into the walls and removing the areas affected by the water damage.

A plumber arrived to unhook the plumbing in the bathroom and another trade came in to remove the cabinet and sink.

The girls’ bathroom was stripped down to the sheetrock and our mudroom/storage closet had a large section of wall removed.

They set up all of their drying equipment and we spent 4 days listening to what sounded like small jet engines blowing through the house.

I will admit, the Bloomfield warranty company sent their head guy over to oversee the process. He was here almost daily and made sure we were comfortable and was able to offer us reimbursement for hotel stays and meals during the 2-week period that our house was in disarray.

Not to mention, he offered to fix things that might not have been up to our standards upon move in. To clean up the mess the contractor left behind.

We took him up on the hotel stays for 3 nights, 2 during the drying process due to anxiety-inducing noise levels and one during the construction process.

There were no less than 20 people coming in and out of our house over those last two weeks. When someone stopped by and rang the doorbell, I didn’t even realize I needed to get up and answer it.

We had grown so accustomed to people coming and going that I didn’t think anyone would need me to get the door for them.

To say it “was an experience” is putting it nicely I think.

When you move into a new home, especially a new build, you kind of expect things to go well… at least for a few months. Dealing with black mold less than three weeks in was definitely never a thought that crossed our minds.

Exposing our family to symptoms of mold sickness was not something I had even imagined this early on.

They finally finished all of the clean-up and construction on Saturday. In addition to the black mold mess, they also repaired our sad dining room bench seat that we complained to our contractor about repeatedly.

It was the final piece they attempted to fix on the morning of our closing.

Seriously. While we were at closing, the Bloomfield contractor had his crew out working on last minute touch-ups, including doing one last less-than-perfect job on this window seat.

Anyway, they also fixed our bedroom windows so that they no longer sit flush on that bench seat and a few other paint touch-ups we needed done after moving.

All-in-all, if we had to go through this experience, the warranty team did help make it bearable. I have to give them that much.

Ready for some application points on what to do if you find black mold in your house? Try these tips:

Beyond that, you are on your own based on which path you go. We took these three steps and then called somebody.

Check with your home warranty or insurance company to see if either will cover the cost of removal. I found several tutorials on removing mold yourself, just be sure to take every precaution and follow all the safety rules!

As for me, I’m glad to be done with it and hope it never happens again. I’ve seen it several times on my favorite home improvement shows, but when my own kids were involved it seemed to intensify the situation.

After all, keeping my children safe is my top priority. When my Bloomfield house seemed to be attacking my kids, you better believe I went into full “mama bear” mode!

Oh, and as for loving the new house, now that everyone is done coming and going and we may be able to finish unpacking and decorating, it’s starting to grow on me.

But, I highly suggest you do vigilant research on Bloomfield Homes complaints if you’re in the DFW area (or Texas, for that matter).

We were so excited about the custom changes they agreed to make for us that we looked at things with rose-colored glasses on. Little did I know what would happen not only with our house, but between us and the President of the company.

LESSONS LEARNED FROM BUILDING A HOUSE