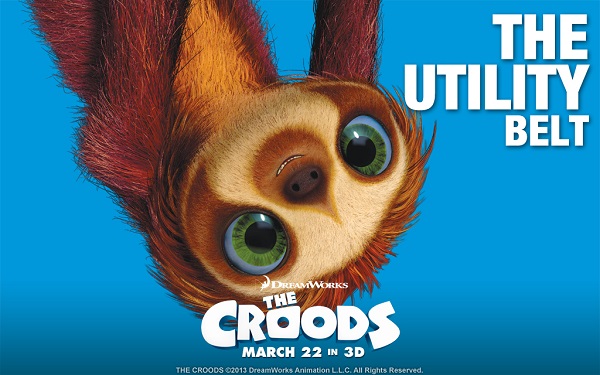 You’ve been on a road trip, right? Well, imagine a road trip where you and your family are literally traveling to an unknown destination. You are simply going to follow the sun and see where you land.

Along the way you discover new concepts and things you never knew existed. Plus, it’s just not a family road trip until someone cries… or grandma tries to take a bite out of someone’s leg. But after losing their “cave” that is what The Croods must do to survive.

“Never Not Be Afraid”

Gathering breakfast goes beyond the realm of running to the local market. In the desolate land of dinosaurs and rocks, The Croods must fight for breakfast and it becomes a battle royale.

Each member of the family plays a part before collecting their prize (breakfast) and returning back to the safety of their cave. Within the cave, the father, Grug (voiced by Nicolas Cage), feels secure and keeps his family protected.

He has taught each of them the secret to staying alive: “Never not be afraid.”

But Grug’s oldest daughter, Eep (Emma Stone), has a curious mind and ventures out one night on her own where she happens upon another human, Guy (Ryan Reynolds).

Guy is far more advanced than her savage family and peaks her curiosity.  It is with Eep’s new found friendship with Guy, the destruction of their cave, and the discovery of a new world that leads

The Croods on a family road trip.

The father-daughter relationship between Grug and Eep tugged at my heartstrings a bit. Watching my husband as he struggles through the “girl issues” with our 4 daughters, I found this story line to be the most fascinating.

Understanding the dynamics between a parent and their child is incredible to discover at any age. It was touching and commendable to see the relationship displayed in a positive light.

Not only did my younger girls enjoy the movie, but my teenagers did as well. We are already constantly quoting lines from the movie and “Belt’s” iconic “Da da daaahhhh” has become an everyday occurrence here at the house.

In fact, my husband and I both laughed throughout the movie and cannot wait to see it again. The graphics were great and the bright colors of the film truly grabbed our attention.

Colby and I were also able to take our middle two daughters to meet The Croods’  directors: Kirk DeMicco and Chris Sanders.

We had a fabulous time watching their presentation on the 39 animals actually created for the movie. Now, only 21 made it into the movie but others will make an appearance in the upcoming video game.

The kids all had fun seeing how they came up with the various animals by blending ones we know today. The adults enjoyed the irony found in several of the combinations such as a mouse/elephant and a cat/fish.

Belt is perhaps the most notable creature in the animal. He actually began as a “living  belt” but his role grew once they decide to animate him a bit more.

With all of Guy’s travels, Belt was one of the “things” he had collected along the way, like the seashell necklace around his neck. But as Guy’s only friend, it was decided he needed to be more interactive.

I love that they made this decision because he is our favorite character!

Guy himself is considered the “1st nomad“. His family was most likely not cave dwellers like the Croods and would have lived in huts. In fact, his states that he is “just a man. I dropped the cave.”

He has a brain full of ideas and the Croods need him to get through the new world. And Guy even comes to realize at one point that he needs the Croods just the same.

In fact, that is one of the underlying messages of the movie according to Kirk DeMicco:

The Croods are a dead end without Guy and vice versa. The Croods have the family bonds, whereas Guy has the willingness to move forward. They both need each other to go on.

Both the strength of the family and concept of imagination are necessary to properly keep us moving in a forward motion.

My 9 year old wanted to know why DeMicco and Sanders chose humans for this movie rather than animals. Their answer was simple… yet right on. They wanted to represent a movie with characters that were more grounded.

As movie-goers watch others humans they can feel the peril and emotions of the characters on the screen. It helps to better relate to the movie and thus keep you tuned in. And I must admit, I was very much drawn into the movie.

I was excited to hear there may be a Part 2 coming one day. Let’s just hope it doesn’t take another 9 years like this one did!

And, just for fun, my family and I were talking about what we thought Grug might include in a survival kit for his family:

We simply could not resist! Now make sure you see The Croods opening everywhere Friday, March 22.