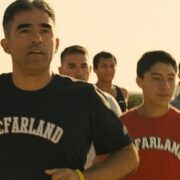 We often hear it said that “it takes a village” to raise a child. I know that I have found this true with my own children. And when we asked the real-life Diaz brothers from McFarland, USA, they agreed. In fact, they call Coach Jim White their second dad.

The three Diaz brothers featured in the new Disney movie, David, Damacio and Danny, all speak highly of both of their parents. Their mom and dad worked hard and pushed the boys even harder to succeed and do well.

Additionally, Coach White would be there for counseling and fulfilling needs beyond what their parents could afford. They came from a large family where faith, education and hard work were important.

The community of McFarland still works as a village to raise their youth.

With nothing to do in their small town, kids have two choices: education and sports… or the streets. There are no shopping malls or large grocery stores. In fact, a blink of an eye as you drive down Highway 99 in California and you will miss it.

Disney’s McFarland, USA, is helping to put the Diaz’s hometown on the map across the globe. Everyone there is excited about the movie and the notoriety they have been receiving from it.

Although, the brothers did say that the town hasn’t really changed much, Coach White has noticed one big change. Their city logo and motto have both been refreshed to express the new outlook of their community.

As you pull into McFarland, you will know notice a silhouette of a runner running through an open field. Under it you read three words: Tradition, Unity, and Excellence.

Speaking of running, we asked the Diaz brothers if they still run. They all spend some time running with the cross country team, as well as with their own kids.

Plus, David still runs competitively and coaches. Danny and Damacio run 3 to 5 miles a day to simply stay in shape.

Honestly, as we sat and talked with the Diaz brothers 3 things were very apparent.

Damacio stated that they were very proud of the way the movie portrayed their story… their family.

Although, David did add that his mom is actually much more strict than she is made to be in the movie. Coach White concurred and said their mom even asked why they didn’t make her strict enough.

Overall though, they agreed that the picker lifestyle and Latino culture of the community was perfectly captured.

Their stories were told in a beautiful way and they are excited Disney picked their tale to tell.

The Diaz brothers represent 3 of the 7 runners from the McFarland Cross Country team of 1987.

The former teammates are not only working in their hometown, but also raising their families there and actively supporting the cross-country teams of today by coaching, helping out with the meets and practices and donating goods or money so the teams have what they need.

Coach Jim White is retired now, but if you go to McFarland, chances are you will see him out there on his bike, keeping up with the kids every evening with a lot of his original team running alongside as well.

White retired in 2002 after teaching in McFarland schools for 40 years and coaching for 25 years.

McFarland, USA comes to theaters on Friday, February 20th. Go see it with your family!

Fun fact: Rafael Martinez, who plays David Diaz in the movie, is one of my closest friends even to this day!