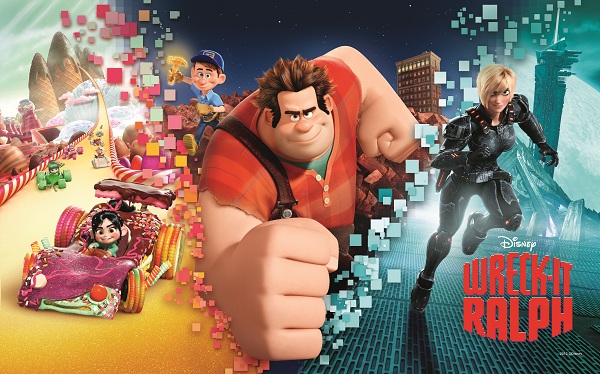 Have you ever wondered what happened to the video game characters after the game is turned off? I mean, we all know that our toys go on to make a series of highly successful animated movies while we step away, right?! But, what about video games? They live in a virtual world inside our computers and arcade games. What happens when we turn of the game? I recently discovered while watching Wreck-It Ralph that they head to Game Central Station when the game is over. It is within this busy hub that we see the video game characters unite: Q*Bert, M. Bison, Zangief, and others can be seen wondering the large hall of busy-ness.

Imagine living in a game where your job is to be the bad guy. Every day. Obviously, being the bad guy does not bring an onslaught of friends your way. You are not invited to the after game parties and you even have to live on a pile of bricks. Well, that is the life Wreck-It Ralph (John C. Reilly) leads. Every day, day-in and day-out, he lives the same mundane life as the bad guy of his video game, Fix-It Felix, Jr. All he wants is to be happy.

After discovering that a medal could bring him the happiness he so desires, he leaves his game and heads to a more modern, coincidentally first-shooter game, Hero’s Duty. Here he is introduced to Sergeant Calhoun (Jane Lynch) and unknowingly unleashes a virus that could take out every game in the arcade. But, he has his medal and is back on his journey to happiness when he lands in the candy-coated land of Sugar Rush.

Sugar Rush is my favorite game world in Wreck-It Ralph. Perhaps it is because of the fact that there is candy everywhere and it looks like a delicious place to live?! Or… it is most likely more so because of Vanellope von Schweetz (Sarah Silverman). Besides Ralph, she is the character I find most intriguing in the movie. The very first scene where Vanellope and Wreck-It Ralph meet is amusing and shows her vivacious personality right off the bat.

Considered a “glitch” in her own game, Vanellope, like Ralph, is determined to change her destiny in the game and knows what she must to do to make it happen. Together, she and Ralph discover that there is more to a game than winning and being a hero.

I will never be good, and that’s not bad. There’s no one I’d rather be than me.

Intertwined in the video games and fast-paced animated action, there is a sweet, believable moral for us all in Wreck-It Ralph. Determined to become the “good guy” and a hero of his own game, Ralph ends up learning an important lesson. Plus, he makes a friend in Vanellope, and together, they find a renewed satisfaction in their own self worth.

Although Sergeant Calhoun can be a bit crass in parts, I would still say Wreck-It Ralph is full of family-friendly fun. Fans both young and old will enjoy the nostalgic arcade game scenes and characters. References in the movie will soar over the head of the young children, while entertaining those old enough to understand. Parents of younger children may want to screen the movie first but I have no problem taking my 7 and 9 year old daughters to see it. Ralph is lovable and Vanellope is endearing. Both have motives that are purely innocent in nature and team work helps them achieve their goals. Overall, Wreck-It Ralph teaches a great lesson in character development and is entertaining from beginning to end.

Which video game world are you most interested in seeing?

Make sure to see Wreck-It Ralph soon at a theater near you! And don’t forget to get there early to see Disney’s new animated short Paperman before the feature film. You don’t want to miss it!