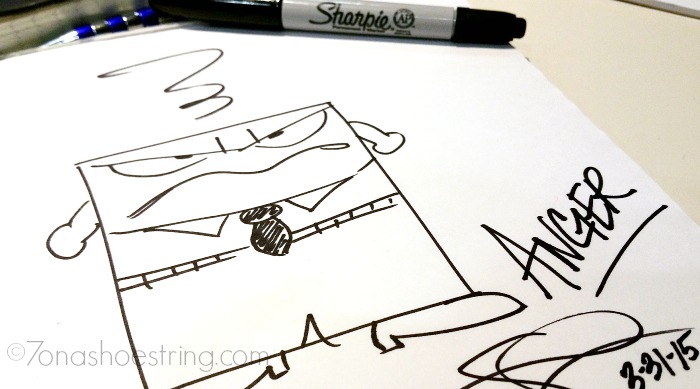 Have you ever stopped to consider how a Pixar film goes from script to screen? Or the fact that really, the story board artists don’t really have much of a script before they begin sketching. They have a concept and build from that. Inside Out Co-Director Ronnie del Carmen and Story Supervisor Josh Cooley talked with us recently about the story process and how a sequence is taken from the script page to the screen in storyboards.

Inside Out Script to Screen

Basically, Director Pete Docter knew he wanted a movie about his daughter, Ellie. As a young girl she was full of spunk. Then, one day around the age of 11, he noticed her changing. No longer was she that joy-filled little girl. Ellie was becoming more of a sullen, silent teenager. He, like most of us do as parents, asked the question, “What happened to my little girl?” Unable to just ask her, he has to find out. Thus, the idea behind Disney Pixar’s Inside Out was born.

The movie actually starts out as a “no frills” idea but the team recognizes that it is a very brilliant concept. As they begin the process, everyone is excited to get started and the brainstorms begin. There were many questions that arose that needed answers. Each one would help form and create the characters, as well as the story. Each one leading to another sequence, one-by-one leading to an actual full-length film.

What do we have?

Well, once they looked at all they had to start, they realized they actually had nothing. Their only recourse was to sit and stare at each other all day and tell stories to begin the creative process. But, as parents themselves, the story artists found something they DID have! Stories of their own lives as parents. In fact, since Josh has a young daughter, much of young Riley’s life is drawn from stories he shared. Plus, her voice is the one you hear in the movie portraying Riley in the early years.

What do emotions do?

Well, not only what do they do, but, “who do they say it to?” and “what do they look like?” These were all questions that arose when it came time to create the emotions. As they begin to draw the characters, the stories start to come. They knew they would be telling the story of a young girl from birth to preteen and these emotions would need to portray her from the inside… out. They began with Joy who had big, expressive ponytails in early drawings. The ponytails would become animated based on Joy’s own emotions. The artists even tried wild, bushy hair, and even fire, before deciding that would be better for Anger. It was a constantly changing stream of events to get it exactly how they wanted.

What do emotions work?

They had to ask themselves, “What are their jobs?” Okay, and “where do they do them?” Maybe they should all work somewhere? Headquarters! The emotions need a window to see what Riley is doing all day. Oh, and how do they make Riley feel things? What else would happen? The concept of movie was to be about emotions and what’s inside the head.

What is Riley doing and how do the emotions react?

As they began forming the story, they realized that what they do for the little girl inside her mind shows up on the outside. The team found the best way to to show what goes on in the inside is to see how it manifests on the outside. Something as simple as a family dinner seemed to portray this well. Although it may not look like much on the outside, inside there is drama and conflict. This becomes the very 1st time we see the most fun execution of the concept. It was this way for the story artists too. They found that it worked, so they had to keep it.

It is a “never-ending calibration of trying to make this movie feel effortless.” – Ronnie del Carmen

Not everything they did was right from the beginning. The story artists would sit and draw their ideas, telling story after story, every day, and often ended up with nothing. In fact, some days they would end up drawing each other, making fun of each other to break out of their slum. By problem-solving and cracking each other up, they were able to exercise story telling and comedy skills.

There is no finished script until the entire process is done. The process of sequencing and pitching goes back and forth all the way through until the movie is finally released. One sequence can spend 2-3 years in story board form and there are 100,000’s of drawings in each movie. Of those, they throw away 1,000’s. Entire sequences will be thrown out. The drawings are done by a collaborative team effort that can sometimes span over many years. Co-Director Ronnie del Carmen calls it a “crazy quilt of various artists.”

See how well the entire team was able to collaborate on the project this Friday, 6/19, when Inside Out opens in theaters everywhere!