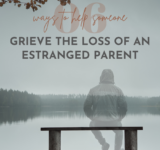 We laid my father-in-law to rest this past weekend and I was really taken back by something the pastor talked about.

He mentioned a quote about the “rear view mirror” that he saw on my father-in-law’s Facebook.

Now, my husband and I would never know because we’re not friends with his dad on Facebook. In fact, he and my mother-in-law have had me blocked for years.

Meaning, our kids have never known them as grandparents. They really don’t know them at all.

Colby never had the opportunity to consider questions to ask your parents that many of us are given.

Back to this quote though. I couldn’t recall the exact one he quoted, and couldn’t check his Facebook, so I found this quote from Joel Osteen (whom I shall reserve an opinion on) on the same topic:

You can’t do anything about the past, but you can do something about right now. Whether it happened twenty minutes ago or twenty years ago, let go of the hurts and failures and move forward. If you keep bringing the negative baggage from yesterday into today, your future will be poisoned.

You can’t change what’s happened to you.

First, I feel like that goes against everything I’ve been taught in the church.

That stuff we’re taught about “forgiveness” and all.

Not to mention, the Bible specifically says, “If it is possible, as far as it depends on you, live at peace with everyone.” (Romans 12:18)

Sometimes I feel like it’s worth it to take a glance in that rear view mirror, admit that there are things you can change, forgiveness to be had, and lives that can be changed.

In this situation, he could have enjoyed SIX grandchildren, instead of only ONE, and had the pleasure of loving on two GREAT-granddaughters.

So, as much as my husband and I have moved on and accepted the way things were after YEARS of trying, I’m not sure how to feel about this.

Sometimes it just seems a glance back may not be the worst move you can make. But maybe that’s just me.

We’ve resolved to the fact that our kids will never have that relationship with Colby’s family, but it doesn’t mean we don’t grieve that loss of what can never be.

For now, I’ll help Colby walk through his grief journey, however that may look for him, and know that we can get through anything together. We simply always have.

After I lost my mom, we talked about what it might look like for Colby when he lost one of his parents. We’ve discovered, just as we presumed, that grief over an estranged parent is very complicated.

Therefore, I did a little research on

ways to help someone grieve the loss of an estranged parent

so I can help Colby through the process.

Here are a few tips for grieving an estranged parent:

It’s been almost four years since I lost my mom and I’m still working through the process. This loss brought up a lot of those emotions, as well as my own feelings about this relationship in my own life.

I’ve known the man for 30 years and have my own memories of him, but, for now, I’m focusing on Colby and his grief. My feelings are something completely different and we’ve talked through those already.

Colby remains our top priority as he struggles with exactly how to feel. He’s only had two small “breakdown moments” so far and has told me he’s had 14 years to grieve the loss of his parents. If anything, he finally feels a bit of closure. And that’s okay too.