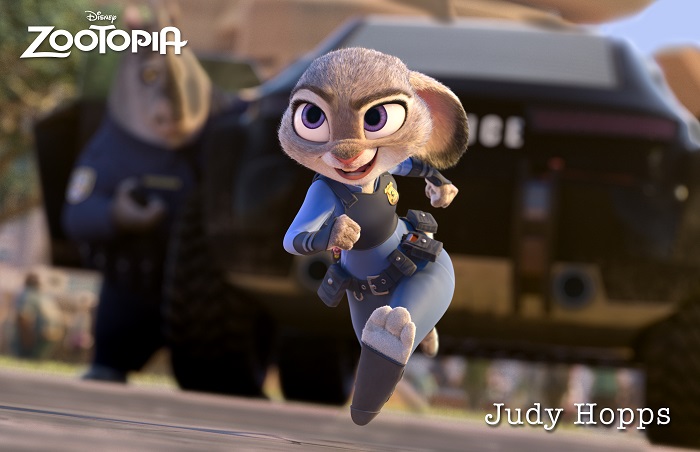 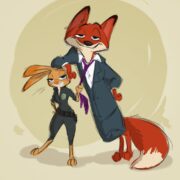 With over a 1,000 unique animals in Disney’s Zootopia, you can imagine the challenges the Disney Animation team faced during character development.

From gnus to shrews, lemmings to leopards, rabbits to rhinos, Zootopia is home to animals of all shapes, sizes, stripes and spots.

There was a lot to be considered as the Disney character design team sat down and came up with the perfect collection of animals to bring to the mammal metropolis.

While the environment team went to a lot of trouble and hard work to build a beautiful city with a variety of districts, Cory Loftis, the Art Director of Characters, and his team worked diligently on character design.

Cory’s job began when he was given the task of populating the city with animal characters.

His team faced a variety of challenges, the biggest one being scale. They wanted to represent a realistic scale of animals, so that meant really large animals and really small animals needed to be able to co-exist in the same animated world.

You might not think it would seem like much of a challenge until you consider the main characters, Nick Wilde and Judy Hopps, upside a giraffe or mouse.

To create a believable world, the character designs needed to be based on real animals. The team looked at photographs and videos of animals, as well as examining animal skeletons at the Natural History Museum.

(Fun fact: Everything in the film was measured in mice). The questions they asked themselves included:

Aside from scale, the next challenge was diversity with each and every animal species represented in Zootopia. Cory and his team had to figure out how to make the characters, as well as their outfits.

For example, once they created the cop uniform, they had to make it fit on different sizes and shapes of animals.

Plus, they had to design several different mice and rabbits, and each had to look different.

They couldn’t exactly have the same rabbit running all over Zootopia!

One of the most difficult aspects of the character designs was the fur. The decision was made early on to make the fur realistic, which meant each character needed to have a unique fur pattern.

The third challenge the Visual Development team faced was the mere fact that they had animals walking around on two legs.

Therefore, they had to determine how each species would wear pants. They wanted fully-clothed animals in a modern world that seamlessly combined animal anatomy with our human anatomy.

Additionally, we have an expectation of how clothes fit and can immediately tell if they fit wrong. Therefore, they needed to develop a more human lower body and more animal body elsewhere.

In fact, some animals needed special consideration; for example, shorts for shorter legs and jeggings for those with lots of fur.

Cory began with something he knew and loved when he started with character creation to simply “get in the mood.”

Referencing Byron’s character drawings throughout the process, and always following the story, they made character changes and design changes to help stay true to the flow of the story.

All of the challenges involved in designing the characters for Zootopia ultimately paid off. The film was a critical and commercial success, and the Cory Loftis characters are a big part of its success.

Cory Loftis and the team at Disney Animation Studios have created a world of fascinating and memorable animal characters that will entertain audiences for years to come.

How to Draw Judy Hopps

Now, Cory Loftis made Hopps sound like a cinch to draw and I will do my best to relay the instructions he gave us (note: draw lightly):

Hopps has a lemon-wedge — or gumdrop — shaped head. (Fun fact: this shape is one of Byron’s favorites when drawing characters and Nick has a similar shape, which ties the two together).

Draw a light line through the center of her head.

Now, imagine a line 1/3 of the way up from her chin and put a mark there for her nose. From the nose, the design will continue to spread out in a big “V” shape.

The lines will now mark where the ears, nose and edge of eyes sit.

Draw a nose in as a circle, then inside the circle, draw a heart.

Hopps’ ears will sit where the line intersects her head at the top.

Fun fact: her ears were a real challenge because they were always up.

Byron promised Cory that Hopps would never wear a hat, but she now has 4 different hats.

Judy’s eyes are football-shaped and (all of the animals, actually) are a little cross-eyed.

Draw her eyelashes on the outside corner of her eye, and her eyebrows start from an imaginary road up to top of head from nose and then down to the lightly drawn line.

Now, from the bottom of the heart in her nose, draw a small line down to make mouth. Draw a light line from the middle of her eye and halfway up will be the corner of her mouth.

Make one swoop to create her lip shape, and, finally, add a bit of darker hair between eyebrows. You’re done!

You have drawn Officer Judy Hopps from Zootopia!

See how it all comes together when Disney’s Zootopia hops into theaters everywhere on March 4.