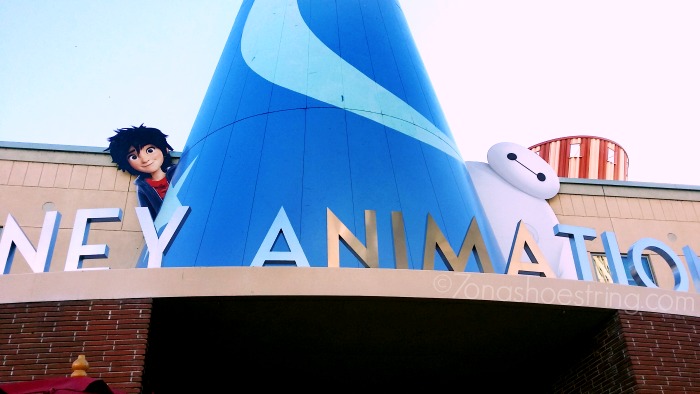 Have you seen Big Hero 6 yet? Or, as the movie is affectionately called around here, Baymax. I mean, it did take the #1 spot at the box office this past weekend, so I can safely say it’s an amazing movie that you don’t want to miss! And bring tissue when you Meet Baymax!

If you have seen the trailer, you know that Baymax is a big, huggable robot that befriends 14 year old Hiro after he looses his older brother. When given the opportunity to talk to the Directors, Don Hall and Chris Williams, we learned a bit more about how Baymax took center stage in the movie… and what happened from that point on. I, for one, was excited about the change in direction and love how the story formed itself once the realization was made. 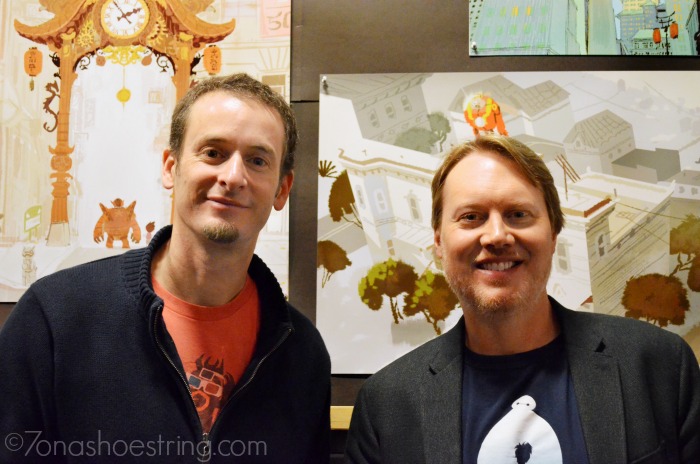 Once Baymax begins driving the story more, the entire movie seems to change its course. You can see the way he is able to create opportunities and provide ways to further promote healing in Hiro. The directors both spoke about how after noticing the way Baymax was leading the story, they went further in that direction and it worked. Being able to constantly stop and reassess where they were in the movie kept the scenes fluid and easy to transition as they went along. 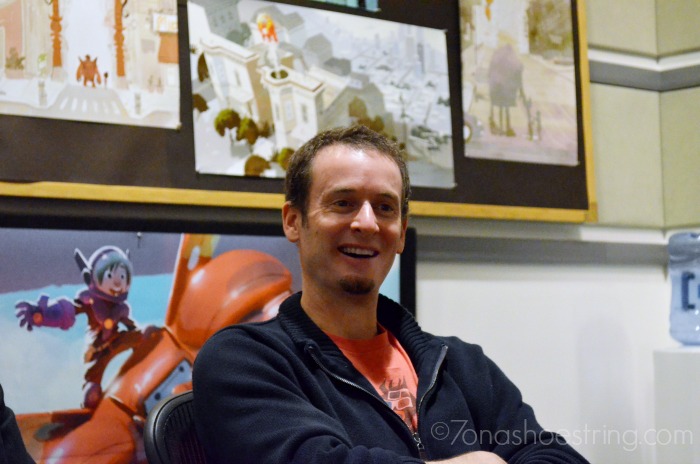 Watching the story unfold, both realized something was missing from the movie. A pivotal point that would completely “solidify” the relationship between this boy and his robot. It came as a late addition to the film, but, without spoiling it for you, once you see the movie, you understand. Hiro and Baymax have hit a new level in their friendship and you can see how much they are invested in each other. 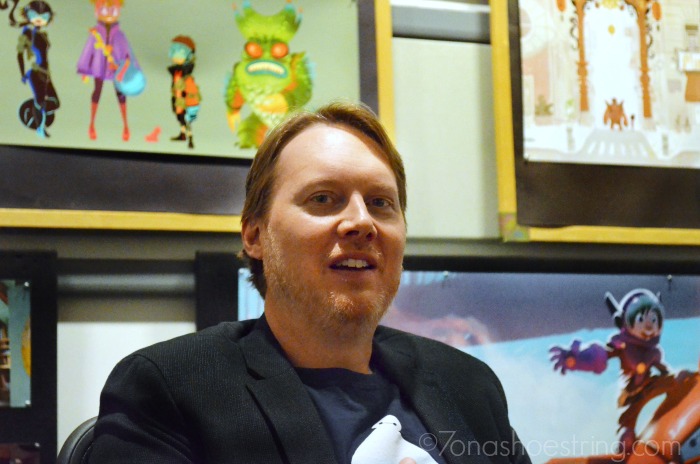 Yet don’t think Big Hero 6 has nothing but amazing characters to bring to the big screen. The background setting of San Fransokyo involved a lot of detail and blending of two cities. Hall and Williams did an fabulous job of setting rules that governed their art direction, which were basically “simple characters on a complex background.” As you watch the Big Hero 6 team you can’t help but be mesmerized by the fictional, yet realistic, technological advanced city in which they live. I know I can’t wait to see the movie again just to take a bit more of it in.

Speaking of the team, one thing I found extremely interesting that Chris Williams mentioned was the lack of superhero powers. They decided very early on that “nobody is magic. Nobody is irradiated by anything, any kind of ray, cosmic ray or gamma ray or spiders, or anything. So it’s going to be real people, and their superpower is gonna be super technology.”

Oh, and that technology? In true Disney style, they did extensive robotics research and were thrilled to discover the soft robotics that led to Baymax. In fact, all of the technology in the movie is based on emerging tech and they were in a constant race to get the movie finished before the science caught up with them! And they did it!

Last but not least, the overall theme of the movie as told through the eyes of the Directors is an incredible one:

…when you lose somebody they can live on through the choices that you make.

Bring tissue when you head to the theater and be prepared to take it all in. You will enjoy meeting Baymax and making this all make sense.

How to Draw Baymax

How would you like to learn how to draw Baymax? We sat down with Jin Kim, the Character Design Supervisor of Big Hero 6, and he gave us a quick lesson. Now, I thought it would be easy since Baymax looks simple. Ummm… not for me. And Mr. Kim said that simple is often more complex. Ugh. You’re telling me. Are you ready for this? Here we go: 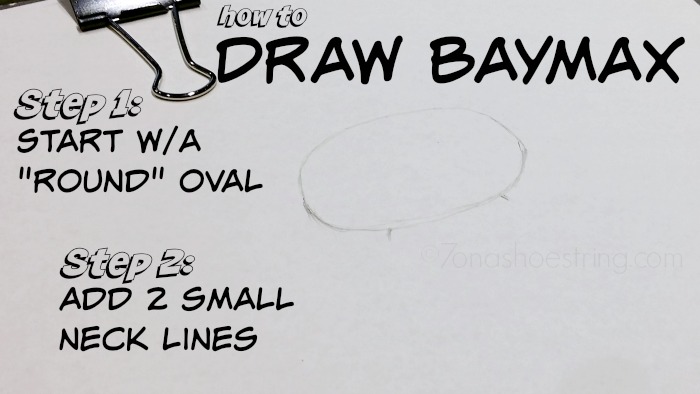 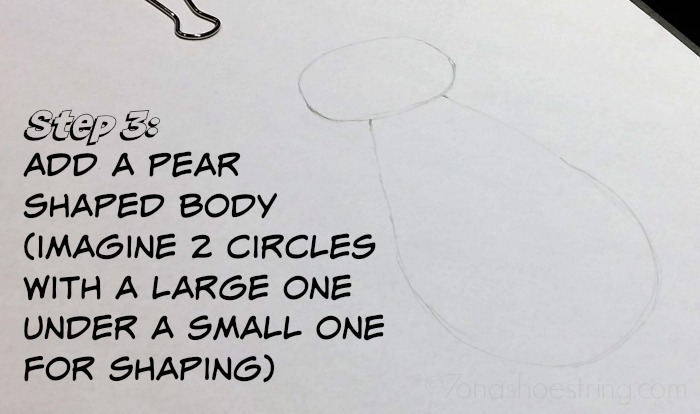 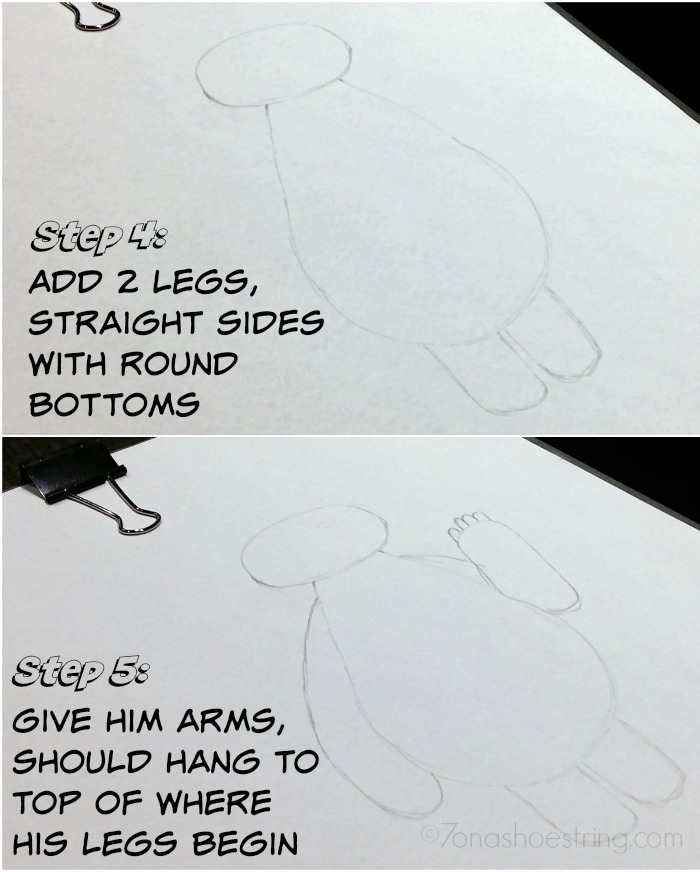 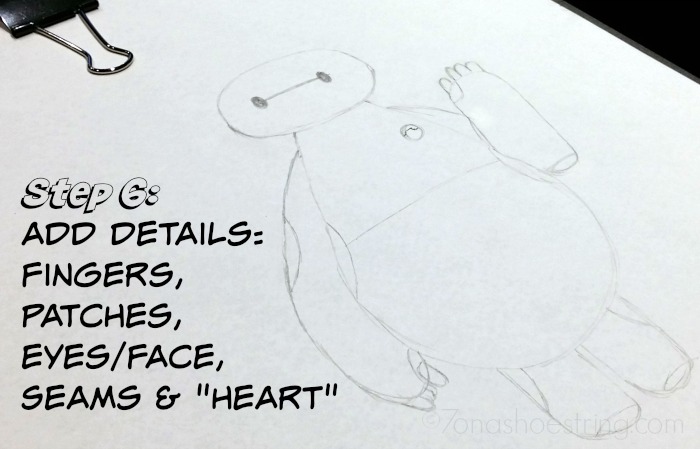 And… so… what Baymax SHOULD look like at this point. Ha! 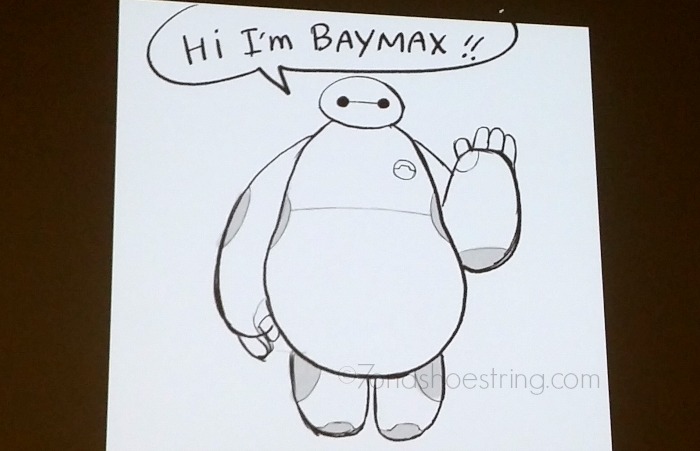 How did you do on drawing Baymax?

Big Hero 6 is the 54th feature film from Walt Disney Animation Studios and opens in theaters everywhere. Follow the #BigHero6Event hashtag (and check back here) for more from the behind-the-scenes interviews coming soon.