Disclosure: This is a compensated campaign in collaboration with Latina Bloggers Connect and AT&T #ItCanWait. Regardless, all opinions are 100% my own.

There is no nice way to put this… texting and driving can be fatal. There it is in black and white. Although we may not like it, the statement is true. The sad part? It really is 100% preventable.

I have heard story after story of drivers dying while in the middle of a text. I have also personally seen cars speeding down the highway with the driver typing away on their phone. Not looking at the road ahead. My family and I right beside them on the road. THIS is what enrages me most. Putting yourself in danger is one thing… but endangering the life of my children… of others on the road for a text is wrong on so many levels. Guess what? #ItCanWait!

Fact: Texting while driving is involved in 100,000+ vehicle crashes each year, often causing injuries and deaths.

AT&T’s It Can Wait® movement has logged more than 2 million no-texting-while-driving pledges through ItCanWait.com since it began in 2009. In 2012, with the introduction of the first “National No Text on Board Day“, there has been a 26% increase awareness. People are listening and making changes. I know that I have made the pledge for both myself and my family. My kids are not afraid to remind someone that they should no be texting and driving. The goal? To make texting and driving just as unacceptable as drinking and driving. There really is no difference if you really observe the two from outside the car.

Fact: 77% of teens have seen their parents text and drive, and 75% say it is “common” among their friends.

Colby and I once followed a car for several miles observing irrational driving. Feeling that the driver was no doubt under the influence, we called the police. We were instructed to follow safely behind and watch the vehicle. We reported our location as we drove and eventually the police officer caught up to us. Once he pulled over the driver, we observed as he led her through the sobriety tests. Then we saw him let her go. He came to talk to us and informed us that she was sober… and was “only” texting while she was driving. Wow.

Through AT&T’s “It Can Wait” public awareness campaign, they have one goal in mind: To Save Lives. The entire campaign is focused on one simple, yet powerful, message:

No text is worth dying for.

I would have to agree. Don’t you? AT&T has even introduced their DriveMode® app available on devices such as the BlackBerry Q10 to further aid the movement. The app automatically sends those who text or email a message letting them know you are driving. I will discuss the app in more detail after I have had a chance to use it more with the BlackBerry Q10. 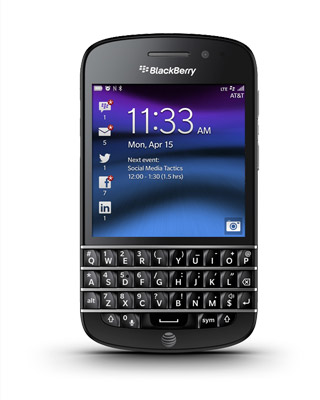 How do you keep from being distracted by your phone while driving?

Makes sure to take the #ItCanWait Pledge to learn more about the campaign.