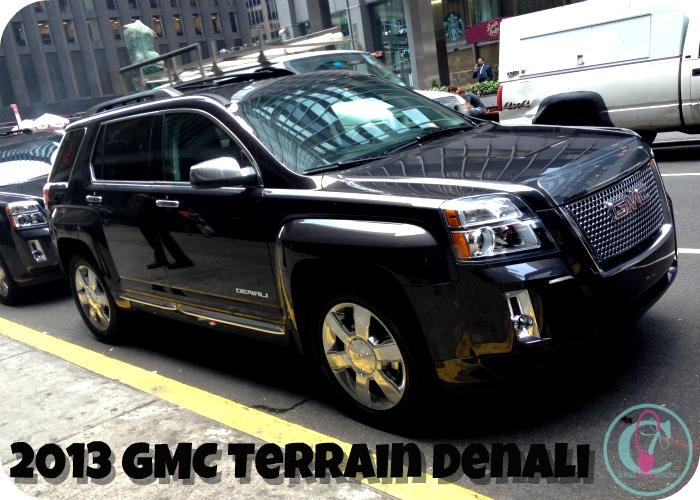 Disclosure: I was offered an opportunity to test drive the 2013 GMC Terrain Denali while visiting New York City. No compensation was given. All opinions are 100% my own.

While I was at BlogHer a week ago I was overly ecstatic about being able to do a bit of “community service” while I was in New York. You can imagine how thrilled I was to receive an invitation to attend the Lend a Green Thumb event with GMC.

Yes, the car company. At first the excitement was wrapped up in driving the new 2013 GMC Terrain Denali… but I cannot explain how exhilarating it was to deliver supplies to the Convent Garden.

Let’s talk about the Terrain a little at a time and come back to discuss the event.

First, I must tell you a bit about the 2013 GMC Terrain Denali. The SUV was so much fun to drive. Even through the New York City traffic, I was able to easily maneuver through the sea of taxis and make my way to the highway.

Driving by the Hudson River, we took in some amazing views as well as really discover what the Terrain Denali could do. It was very smooth handling and was extremely comfortable to drive.

From the leather seats and leather-wrapped steering wheel to the programmable power lift-gate, the Denali was both delightful and breathtaking to experience.

As a tech geek, the smartphone integration was appealing and perfect for the family on the go. Hands-free calling and Pandora were both easily accessed through the IntelliLink technology of the vehicle.

Voice commands, USB, and a custom home screen that accompanied the Color Touch Navigation System help round out the awesome technologies of the SUV. I can honestly say the GPS was a life saver as we drove through unknown streets in NYC and Manhattan to reach our destination.

We had a pre-determined drive programmed into our navigation system and each one of the vehicles in our group arrived without fail. I was informed when a turn or exit was approaching and  the maps were update and easy to understand.

Plus, the multiple map views and various other entertainment features made the display a fun added feature. Not to mention it has a great rear-vision camera system that is a marvelous safety feature for any driver.

Whenever I get a chance to look at a new vehicle I like to check out the view from the backseat. With 5 kids back there, I like to see the vehicle from their perspective.

So, even though I was driving throughout the city, I did slide into the back seat while we were stopped for a bit. The first thing I noticed were the screens on each of the front chair backs.

I asked about separate movies playing at once but was told that their can be only one movie playing at a time… but the other screen can host a video game while the movie plays. That was good enough.

The cargo capacity behind the row of seats is actually quite large and houses one of 4 auxiliary power outlets. Furthermore, the programmable power lift-gate allows the owner to have a memory setting for smaller drivers as well as lower garages.

Not to mention, a simple push of a button slowly lowered the lift-gate and I was assured that the door will stop and release if something (like a child) gets in its way while shutting. That was a huge plus for me!

The one downfall I discovered was the lack of overhead air vents. Living in Texas, air conditioning is obviously important and we were unable to locate vents anywhere except under the seats.

Therefore, it took a bit longer to cool down the back cargo area but was fine after a short ride. Also, I would probably need more cup holders… but that is just one of my crazy mom quirks.

I think the kids would still enjoy the backseat as they watched the clouds go by out of the sunroof in the front!

A concern for any parent, there were several fantastic new safety features included:

The standard engine in Terrain and Terrain Denali is the Ecotec 2.4L four-cylinder, which also features direct injection and camshaft phasing to optimize performance and fuel efficiency.

Finally, the 2013 Terrain is available in 4 exterior colors:

What do you think?

There is so much more to this vehicle that is still to be experienced.