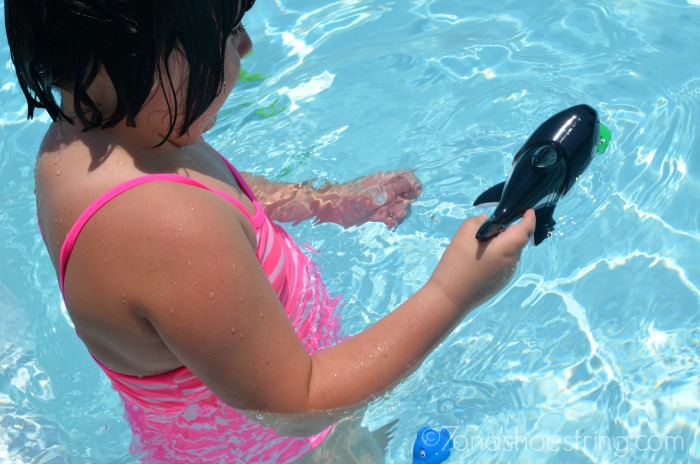 We have “finally” hit the triple digits this summer. That means plenty of pool days. It also means we have to get creative with the kids sometimes in the form of swimming pool games.

It seems that just swimming alone doesn’t always keep them entertained. No worries. We have games and SwimWays pool toys!

Having pool toys means we can typically hold out on the girls getting on each other’s nerves while in the pool. The youngest three are so near in age that it just happens after a while.

Fortunately, a little creativity and props can mean laughter and joy as they stay cool in the swimming pool.

Equipped with the SwimWays Squidivers, we found great ways to incorporate them into Swimming Pool Games for Kids:

If the kids begin looking for something a little different, the SwimWays Gobble Gobble Guppies is perfect for a change of pace.

Or, we use the Gobble Gobble Guppies to keep our youngest entertained while the oldest play. She loves squeezing the trigger to gobble up the guppies.

Plus, she can work on colors and counting, as well as her fine motor skills and eye-hand coordination. Not bad for a little pool time.

What swimming pool games do your kids enjoy?