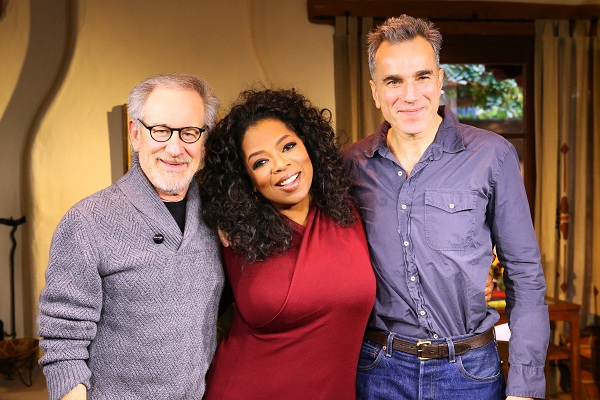 If you have not seen Lincoln yet I highly suggest you do so! The movie is one of my very favorites already and you do not want to be the last one to see it!

If you have seen it, you are well aware of the incredible acting in the movie. Daniel Day-Lewis, Tommy Lee Jones, Sally Field and a host of others do an incredible job of taking us back to the 1800’s and into Lincoln’s mind.

I could literally go on about this movie for hours. My lengthy review should have shown you that!

And this weekend, Steven Spielberg, Daniel-Day Lewis and Sally Field will talk with Oprah about the movie, Lincoln.

You can tune into the 90-minute special of “Oprah’s Next Chapter” this Sunday, December 2nd at 9:00pm on OWN: Oprah Winfrey Network.

In a full circle moment, Winfrey meets Spielberg at DreamWorks Studios in Los Angeles in the same studio building where she first auditioned for him for her role in “The Color Purple.”

In an intimate sit-down interview, Spielberg shares with Winfrey the process of creating “Lincoln” and how he was moved to tears during filming.

They are then joined for a rare interview with Day-Lewis for a fascinating conversation about his first-time collaboration with Spielberg, his yearlong immersion into the life of Lincoln and how together, with the rest of the esteemed cast, they created a “sacred space” on the set.

Later, Winfrey shares in a heartfelt conversation with Sally Field from her new home in California.

Field talks about the emotional depths she tapped into for her role as Mary Todd Lincoln, how she fought for the part and her immediate connection with Day-Lewis.

She also opens up about being plagued by self-doubt, her pride in parenting a son who is gay and the joy she welcomes as she enters the next chapter of her life.