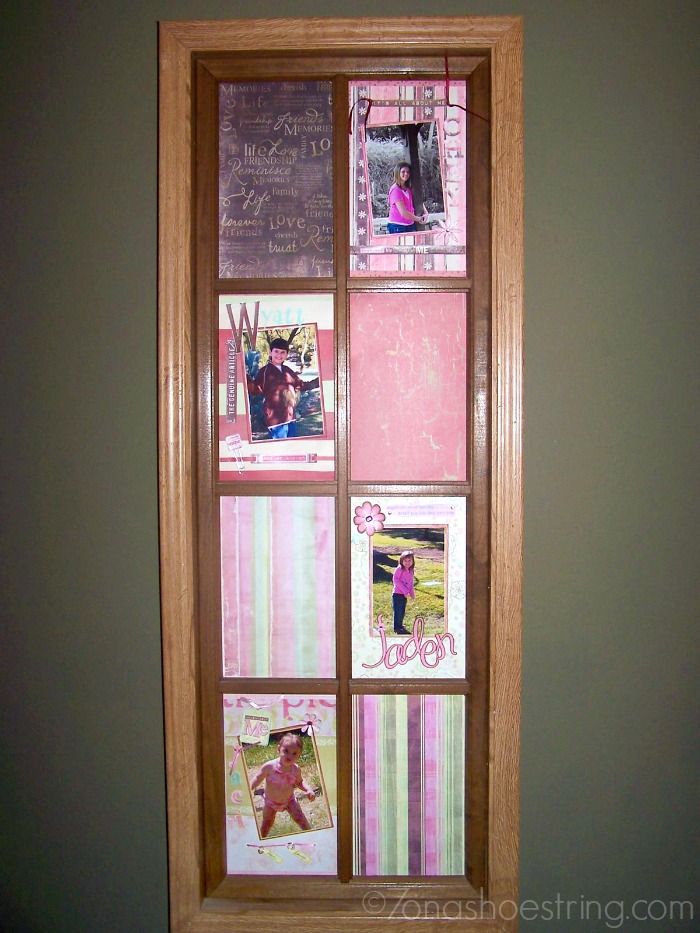 It’s 3:30pm in the afternoon and I still have not blogged today! What’s up with that? I got on earlier and did some “piddly” things, as well as making sure my older two got their school work done. Then, I got off so that Princess JF could get on and play some “letter games” (with this great free program located here). After her, Prince W needed to do an hour of study online while Drama Queen was on the student computer upstairs … so, I took a nap! Now, my computer is free and I was noticing a recent project I put together in our living room … and thought that maybe I could blog about it? Will it interest anyone? I dunno … but I like to show it off!

Anyways, my dad was recently remodeling their dining area (he’s always remodeling something in their home) and it involved tearing down an existing wall into the kitchen to make the dining area bigger (he made a nice long dinette set big enough for “most” of the family to fit). The wall had a fake window frame that passed from one room into the other. When we arrived, he had the wall torn down, with the window frame still attached. I asked him if he had plans for the window, to which he replied, “No?” So, I told him I wanted it. I immediately went home (after measuring each opening) and began working on what I wanted to put inside each frame. I bought some new papers to match our home decor, picked out 4 pictures of my kids, and got started.

Now, this was all done in preparation for the window, which I wanted up and displayed before my extended family was to come to my house that following weekend for our family Christmas. Thus, I had all the pieces done and my parents came over mid-week to help us clean and prepare for the 60+ people coming over, and I asked my dad where my window frame was (I had already called twice that week). He laughed and said he thought I was kidding! No, I wasn’t kidding, I had already scrapped the pages to go inside!

Finally, on Friday, before the family affair on Saturday, my dad showed up with the window frame! I was finally able to put it all together! Drama Queen and I laid it all out and she helped me cut up cereal boxes to use as backing (have to be frugal here)! As I positioned the pieces into the openings, she taped them in place along the backside. Then, she and I positioned the cereal box cutouts along the back so that it was fully covered, and then stapled them along the sides. Super Dad put the hooks in the top that my dad so graciously included for hanging, and we hung it in a predetermined spot my mom and I had picked earlier.

It looked awesome when we were done .. or at least we thought so! My family really enjoyed it … and, of course, I had a few people that wanted one for themselves. But, I must mention, like most things I put together (I take after my dad here) because I was in a hurry I did not get to finish the actual frame. I still want to add some word at the bottom with altered letters … maybe “family” or “love” … I dunno yet? I might finish the next time I haul all my scrapbooking stuff out! Did I mention … my dad still has two more of these in his home … and I can’t wait until he decides these need to come down too! ~clap~