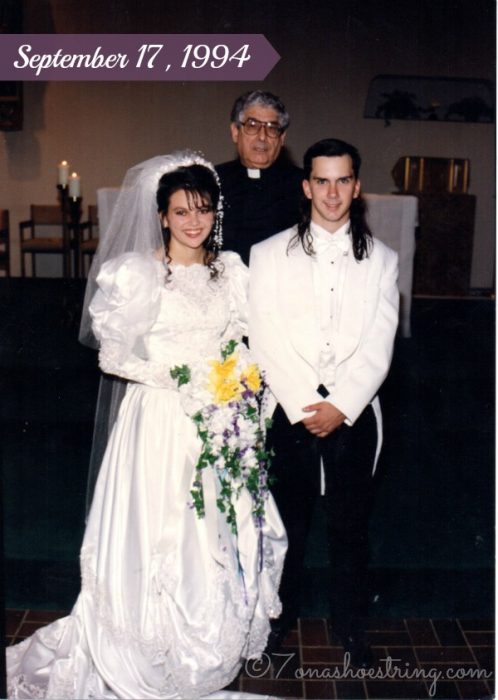 If you have been following along, you may remember that on my last post I left the story at the proposal. Remember? Will you marry me or what?

Seriously. That was how Colby asked me to marry him. (Yes, he still catches grief over it.)

So, we began to plan the wedding.

Let me tell you, my first (and only) confession was interesting.

Alas, there was one thing that we were grateful to gain through the church. The Pre-Marital Classes we attended were eye-opening.

There is one important key point we still find true today:

This fundamental choice would become vital years later. It started before the wedding really. Let’s just say that the sheer mention of “bachelor party” (ugh… even writing it) makes my skin crawl.

Colby’s was not pretty. And I was the one who had to help him to the toilet where he spent the night afterward. My brother was not my best friend for a while after that one. Yeah… moving on.

The day of the wedding was filled with it’s own craziness. Colby had an accident in our new Geo Tracker and had to call my parents. Everyone knew but me and made sure to keep it a secret.

We forgot half of the things we needed for the ceremony at home. It was incredibly windy and the wedding pictures were all kinds of crazy with my long hair and huge dress.

While trying to help set things up at the reception I knocked over a tier of our wedding cake. Just all sorts of little things.

The next morning we packed up our (recently damaged) car and drove to Galveston, where Colby’s company let us stay in a corporate time share for the week.

At least we had that, right? And it was a beach-side condo. Private pool. Amazing place. And me? I cried all week. Why? I wanted my mom.

Yes. I was that much attached to my parents. (I think I have been able to cut the cord a bit after having my own children… just a bit).

But it was really a short lived honeymoon phase. Once back home we went back to life. He worked. I went to school. And 3 months later we were pregnant with our first baby.

Although the pregnancy was a difficult one for me physically, we got through it. But, with months of bedrest and an in-home nurse, it meant I was done with school.

We had our daughter in 1995… 4 days after our 1st anniversary. 1 week after her 1st birthday we got pregnant with our son. This is when everything went downhill.

When you have to make a choice and don’t make it, that is in itself a choice.  ~William James

I worked a split shift as a Child Care Supervisor for 24 Hour Fitness so I could take my daughter with me. I would work. Go home for a bit to rest. Go back to work.

Colby was working a late shift getting him home around 3am. It was awful. We never saw each other.

Our son was born in June 1997. He had colic and I had Postpartum Depression. Colby was still working the late shift and around the time our son turned 6 months old, Colby did not come home one night.

I was sure he was dead. My brother and dad searched all over Downtown Dallas for him since that was were he was working.

The next morning around 5am I got a phone call. The only words I remember?

I don’t love you anymore.

I screamed. I cried. I yelled. “NNNOOOO!“

Colby had stopped making that choice to love me.

I talked him into coming home that evening so we could talk. It was not easy. I begged him to “give me another chance.”

We decided to ask my parents to keep the kids while we spent a weekend together reassessing our marriage.

Colby agreed to find another job to be with us more. And, ironically, that next job would be the ultimate downfall to our marriage.

He met a girl that “helped him” see how I held him back. Together they found fun things to do… late at night… without the kids and I.

When I called Colby to come home he would hang up on me.

I began working overnight at Toys ‘R Us to help out financially. I made friends that I could “complain to.” That I could hang out with. That I could confide in and no longer depended solely on Colby for fulfilling all those needs.

Our relationship was slowly breaking down. Neither of us were trying any longer. I came home from work one morning and there was a bag packed. We fought… ugly. Things were thrown. Broken.

It was one of the worst moments of my life.

Colby grabbed his bag and left that morning. And, for the first time in over 8 years, I didn’t follow him. I didn’t ask him to stay. I just let him go. I have regretted that choice ever since that day.

Wow. (No wonder I am shaking and crying as I type).

Well, another 1,000 words and we have reached the next pivotal part of our marriage. (I promise… it gets better *wink*)

That means you will have to come back again and read about the next few years as I went on without Colby. Just the kids and I.

And, as insight into the next chapter…

“Lord, how many times shall I forgive my brother or sister who sins against me? Up to seven times?” Jesus answered, “I tell you, not seven times, but seventy-seven times.” ~Matthew 18: 21-22

To keep my never-ending list going of reasons I love my husband:

11. He is afraid of snakes. And he is not ashamed to show it. So much so that he even “lets me go first” in dark fields at night. It shows me he is tender-hearted.
12. He enjoys shopping. As much as I detest to shop, he doesn’t mind it. He has patience at the stores and hurries the kids so I do not have to stay in stores long.
13. He never thinks before opening his mouth. Although it has “got him into trouble” it has also poured out some amazingly intimate thoughts.
14. He puts his hand across the small of my back. At home. In public. Wherever it may be. When I feel his hand on my back I know I am safe. I am his.
15. He knows when he cannot win. Not just in a disagreement. More like when I REALLY want something and there is nothing he can do to stop me. He knows.

Was your honeymoon phase all you thought it would be?

How do you make that choice to love every day?