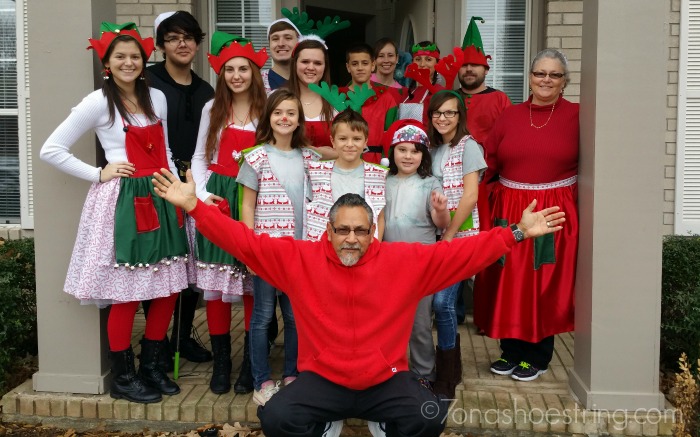 I have mentioned before that my family has a heart for the homeless. We used to go downtown often and take food and clothes when we had gathered enough to pass out. With modern technology, gathering those things is a bit easier and takes less time. So, we have made it a point to go once a month now and are loving the opportunity.

When we go downtown to serve them things are typically so hectic there is not much time to talk with many of those present. This past Sunday was different.

Things ran incredibly smooth and I was in charge of passing out the brand new pairs of men jeans that Lee Jeans sent. I had bagged each pair of jeans with a beanie and toiletries. I used the tags from the jeans to label the bags for easier handling when checking sizes. I stood back and observed the crowd searching for men that would fit the jeans.

After I asked one man his size of jeans (and not having any in his size) he and I had a nice conversation. As we talked he proceeded to tell me his story.

He was a fireman in California until last month. His house burned down on Thanksgiving Day. He threw a blanket on a furnace thinking it was off, but when the heat kicked on it sparked a fire. He said he was surprised by how fast his house went up in flames.

After a fallout with his mom he bought a bus ticket and landed here in Dallas. His son is back in California and his parents are in Oklahoma. I asked him if he had a way to contact them and he promised me he did. I also asked if there was some way we could help. He assured me he was doing okay. He just felt the need to get away. And now he is living on the street. No plans for the future. He said he was a hunter and survivalist so he will be fine. This man did not take one thing from us. Just stood and talked to me.

This crushed my heart.

We don’t always get to hear their stories. I know there are many and this man’s story was only one. How circumstances lead them to the streets. How life can change in a moment… for any of us.

As we stood in the rain passing out food, clothes, gloves, coats and toiletries, I, again, was humbled. Watching our kids engage and be excited to serve was almost overwhelming. Even Jaci, our painfully shy 9 year old, gets giddy about helping and actually asks the men and women if they want the item she is in charge of passing out.

This. This is what the season should be about.

Before we left I had one man come up to me and ask my name. I told him and then he told me he wanted to pray for me. So we did. Just he and I in a parking lot. He hugged me and went on his way with a huge smile on his face. Then there was this man (below). We had snack bags that included mandarin oranges, bowls of cereal, milk and a spoon. This awesome guy couldn’t wait to eat his cereal. He was so excited about a bowl of Froot Loops. He had not had any in such a long time that it was an incredible treat to him. So much so that he even wanted his picture taken.

One man walked up to Cheyenne, our oldest daughter, and asked her if she had any $5 McDonald’s gift cards. He just wanted a meal there. She said when she had to tell him no she wanted to cry. She just wanted to give them to him to make him happy.

I absolutely love the servant’s heart my family has… and the willingness of each of us to listen to that calling. The act of pouring love out to others is one of God’s greatest commandments. Oh… If only…