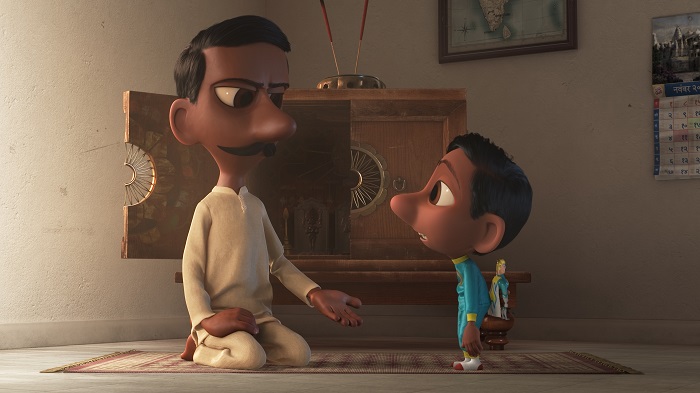 Do you have a story about your own childhood you love to tell? Sanjay Patel didn’t think others would be interested in hearing the incredible personal story about him and his father, but they did. In fact, even John Lasseter, Pixar’s Chief Creative Officer, was interested enough to ask him to turn it into a Disney•Pixar animated short. Sanjay’s Super Team can now be seen prior to The Good Dinosaur.

Producer Nicole Grindle did a wonderful job of helping Sanjay tell the history behind the short during our recent interview with them. This is where she began: Sanjay Patel has worked at Pixar Studios for almost 20 years. During his time there, he has worked as an animator and story artist on films such as Ratatouille, The Incredibles and Monsters, Inc. After some time, Sanjay began to gain interest in South Asian art. He eventually began to illustrate graphic novels based on the Hindu culture, including The Little Book of Hindu Deities. His books grew in popularity and, after a successful show at the Asian Art Museum, Pixar asked him to bring the work there for display. It was at this point that Lasseter saw Sanjay’s work, fell in love with it, and asked him to do the short film.

Sanjay actually fought the idea for a while. He was convinced that this idea did not align with Pixar’s brand and, honestly, he was scared to bring the idea to life. It was only after an enduring conversation with his father that Sanjay felt that he should do the project. After all, it’s hard to not listen to your dad’s advice when it is sound and true, such as the words Sanjay’s dad shared with him, “They’ve had this relationship with you and they’re finally asking you to try this thing and for you not to try would be bad karma.” He continued on to say, “…it was [Sanjay’s] duty to at least try. Win or lose… that doesn’t matter. That’s not part of the equation but it is your duty to at least try.” At that point, Sanjay knew his dad was right and he could no longer argue the fact.

So Sanjay told his (mostly) true accounts of his childhood routine with his father every morning. The short depicts a young Indian boy that was basically ignoring the cultural stories carved on the temples all around him. He had his nose buried in the Western culture and its world of superheros. As his dad was praying to his gods and his shrine, the little boy was praying to his own gods and shrine — the TV and cartoon superheroes. Lasseter told Sanjay, “If you just tell [your story] as honestly as possible people, will connect to it.” So he did. Afraid to say things he would never had said as a child, Sanjay became transparent in the short.

I love that Sanjay Patel’s humility allows this short film to be much bigger than he may realize, but he summed it up with is biggest takeaway from the project:

“…kids of all sort of cultures and identities will embrace [Sanjay’s Super Team] and it just felt really exciting that we could tell this part of the story and have Pixar kind of be the ambassador to it. We’ll make it cool for all kids.”

Perhaps the most touching part of Sanjay’s real life story was the unwavering support of his father. His dad had not seen a movie since “The Sound of Music“, yet agreed to watch Sanjay’s Super Team. He was flown in for a special screening and was quite emotional as he watched. And Sanjay put it, his father was not only proud of his work, but finally knew that his son was not only thanking him for his own hard work, but that he finally understood his father. That was enough.

Be sure to catch Sanjay’s Super Team ahead of Disney•Pixar’s The Good Dinosaur now showing in theaters everywhere.