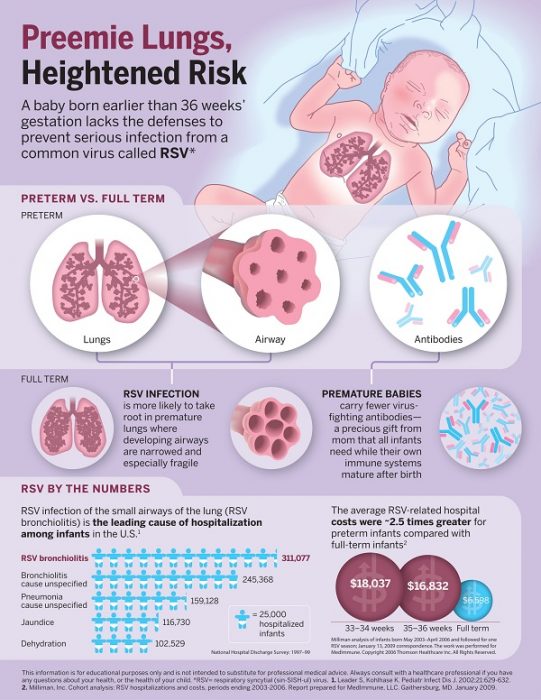 November 17th marks World Prematurity Day. This day is dedicated to help raise awareness about preemies and the potential risks that are associated with premature births. 13 million babies are born early each year. More than half a million are in the United States. Sadly, prematurity is the leading cause of neonatal death.

Many parents do not fully understand the increased risks that accompany a baby born prematurely. They often face weeks or months in the NICU and could have serious lasting medical conditions. Underdeveloped organs and immature immune systems make babies born prior to 37 weeks more prone to infections from common illnesses. A cold, the flu or RSV can be detrimental to a preemie… even fatal.

With under-developed lungs, premature babies are more likely to develop infections have life threatening respiratory problems. One particular virus that can wreck havoc on a preemies lungs is respiratory syncytial virus, more widely known as RSV. Although RSV is commonly attracted by all children under the age of 2, it typically presents itself with symptoms similar to the common cold. With preemies, the risk is increased due to their underdeveloped lungs. They simply do not have the antibodies they need to fight off the infection. This can quickly lead to more serious symptoms, including a critical respiratory infection.

Prematurity and RSV in the U.S. Hispanic Community

So what are the steps to prevent RSV? Well, because RSV is highly contagious, it can spread quickly and easily through touching, coughing, and sneezing. There is no treatment for RSV since it is viral, so you should take preventative steps to protect your child. Make sure to thoroughly wash hands, as well as toys, bedding, and play areas often… especially during those key months indicated above. Ask guests to wash their hands when they visit or use hand sanitizer before having any contact with your child. Avoid being around those who have been or are currently sick, and avoid large crowds. Never smoke around your baby or let anyone else do so. If you believe your child is at a high risk for RSV, talk to your doctor about a possible preventative therapy.

Learn more about RSV and how to prevent it at www.rsvprotection.com and for more information on specialized health needs of preemies visit www.preemievoices.com

Disclosure: This post is part of a compensated campaign with Latina Bloggers Connect.  However, all opinions expressed are 100% my own.