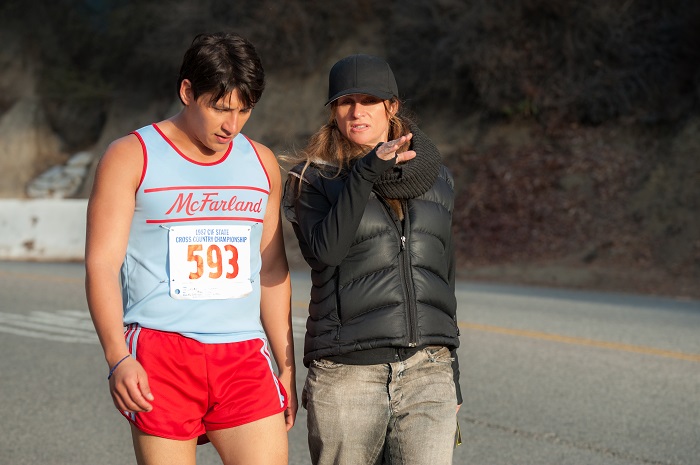 One thing Niki Caro, director of McFarland, USA, loves about her job is the opportunity to tell real stories about real people. For this particular movie, she immersed herself fully into the community to learn about its people and culture.

In fact, when Niki Caro went to McFarland to research prior to filming she was welcomed into the White house. Jim and his wife, Julie, hosted Niki and showed her around town. She believes the best way to learn is to “keep [her] eyes and my ears open and [her] mouth shut. And just see how life is lived. Be really observant.” You can hear her passion for the authenticity in this quote:

“It would be really arrogant and stupid for me, a middle class urban mother of two from New Zealand, to presume what life is like, or to impose my will onto the lives of  Mexican teenagers who work in the fields and run. I know nothing about that… but I can learn.

I’ve become a lot more competent because I have a lot of skill now. Going into communities and representing them faithfully. And I hope respectfully. Certainly lovingly. To shine a light on what those lives are like. And nothing gives me a bigger thrill than to show people from little places. People like these, how beautiful they are… and to show other people how beautiful they are.

Once you watch McFarland, USA, you will fully understand how incredible of a job Niki Caro does in doing this for McFarland, as well as for the young actors who play the seven runners.

Some of the boys had never acted before and she was willing to take a chance on them the same way they were doing on her. Not to mention, she had Kevin Costner on her team. He has the skill, experience and wisdom Niki knew would work well for the film. But, she said he not only showed up as an actor but as “himself and the man he is.”

And that he did. The boys brought out the tender and humble side of Mr. Costner and he gave them his time and guidance. Niki said that the “relationship you see on screen is totally genuine” from the first table read with the boys when he told them,

“You boys remember this. You will remember what you’re about to experience for the rest of your lives. This is about to be one of the most important and defining things you will experience as a human being. Enjoy it.”

Knowing the importance of the film for McFarland, the real-life people, and the actors involved, Caro wanted to make sure that each story was told in its own way. That even though there were 8 people in almost every shoot, that each story was highlighted. She wanted to put personal care and attention into each one as though it was the lead role. And even though it was time consuming, she knew it had to be done that way.

Speaking of attention to detail, during the editing phase of the movie, Niki said she would bring in every Mexican she could find and ask their opinion. She wanted it to be authentic to the Latin culture and lifestyle. Perhaps most fun for her personally was the use of Lowriders in the movie. She and her husband have a passion for Lowriders and the ’63 Caprice in the film is actually her personal car.

Overall, Niki Caro and the entire crew did an amazing job of sharing the story of this small town. The story of how these 7 runners became heroes for the first time in their lives. But, don’t think that the movie is all about the runners. Jim White‘s life was forever changed during that season as well. As Caro puts it,

“The central idea of this movie is that this is not a big white guy saving brown people… but a flawed guy that is redeemed as a coach, as a father, as a human being by these kids… and by their community.”

Honestly, I think she said it well and I cannot say enough about McFarland, USA (read more of what I thought here). Go see it today! Take the family. Be inspired and get excited about the little things. Celebrate life in those moments and know that YOU too are a hero.