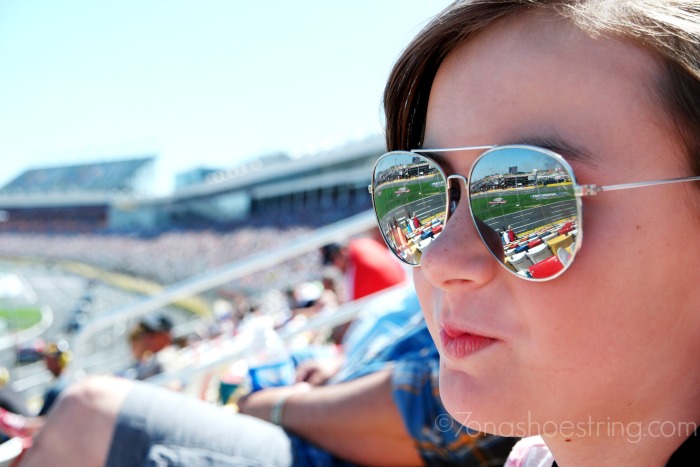 Ya know, if you follow Colby and I online, you may already know that we don’t really stick to general gender roles. Meaning, he is more “domesticated” as I call it, hence the name of his blog: Days of a Domestic Dad. And I have always been a tomboy. I have also always had a passion for cars, and racing. NASCAR in particular. 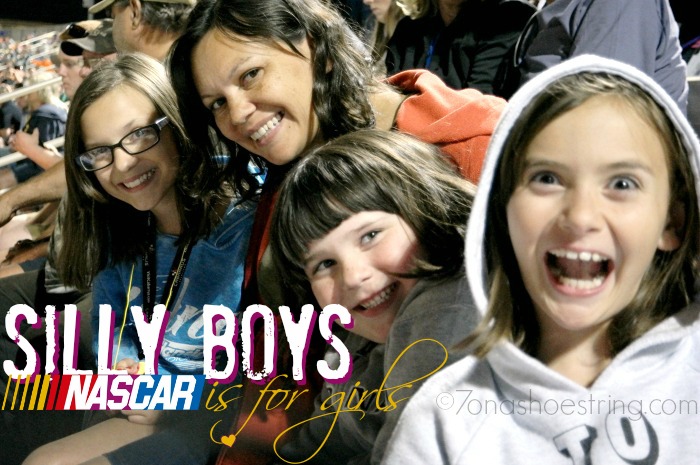 NASCAR IS For Girls

So, when the opportunity to go to Concord, North Carolina, Where Racing Lives, to watch the Coca-Cola 600, there was no way I was backing away from it. We packed up our three youngest girls, hopped on a place, and set our sights on Charlotte. From the moment we arrived, we knew we were in NASCAR country. It was time for the fun to begin! We wanted to show each of you that NASCAR is NOT just for boys… girls enjoy it too! And they truly did! 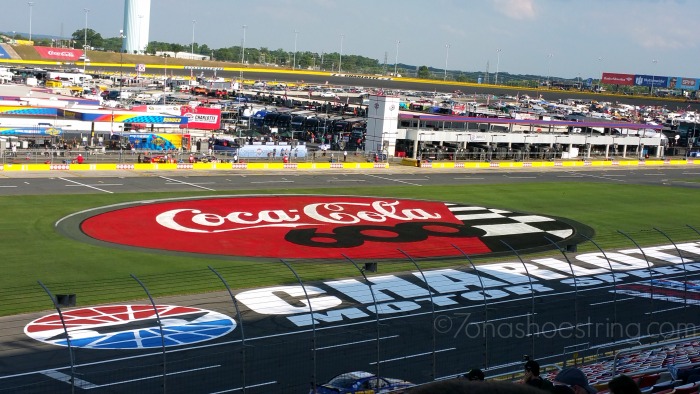 In fact, I was pretty impressed with how well the girls actually did. As we walked through a team’s shop, watched each race, and sampled bits of the local food scene, they soaked it all in. Even when we hit the door running on our first night there with the LiftMaster Pole Night, they were excited and ready to go. 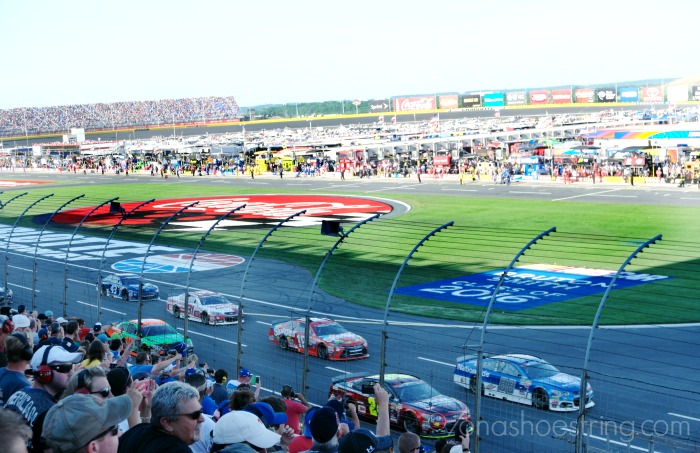 As they observed the cars take their practice laps, Colby and I began fielding questions left and right. They wanted to know everything and there were even a few times we had to Google an answer. We made sure to give them our best answer and they ended the day feeling as though they were learning. After all, cars are intricate pieces of work and girls should understand them as well. 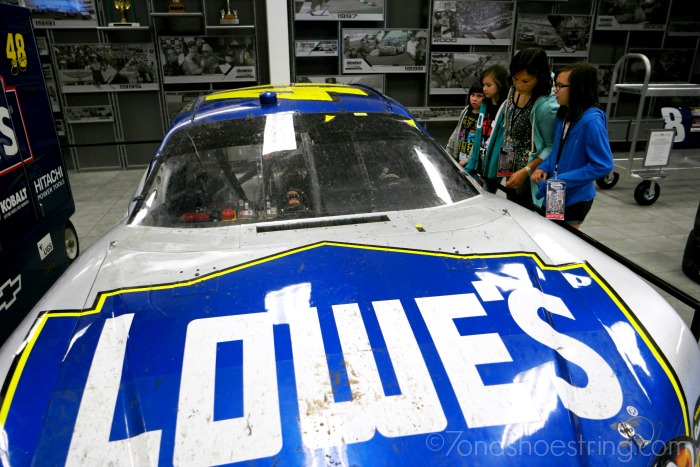 This may explain why they were completely fascinated by the sights and sounds at the Hendrick Motorsports facility. The campus features state-of-the-art facilities and technology, which the organization’s four NASCAR Sprint Cup Series teams employ in preparation for race day. 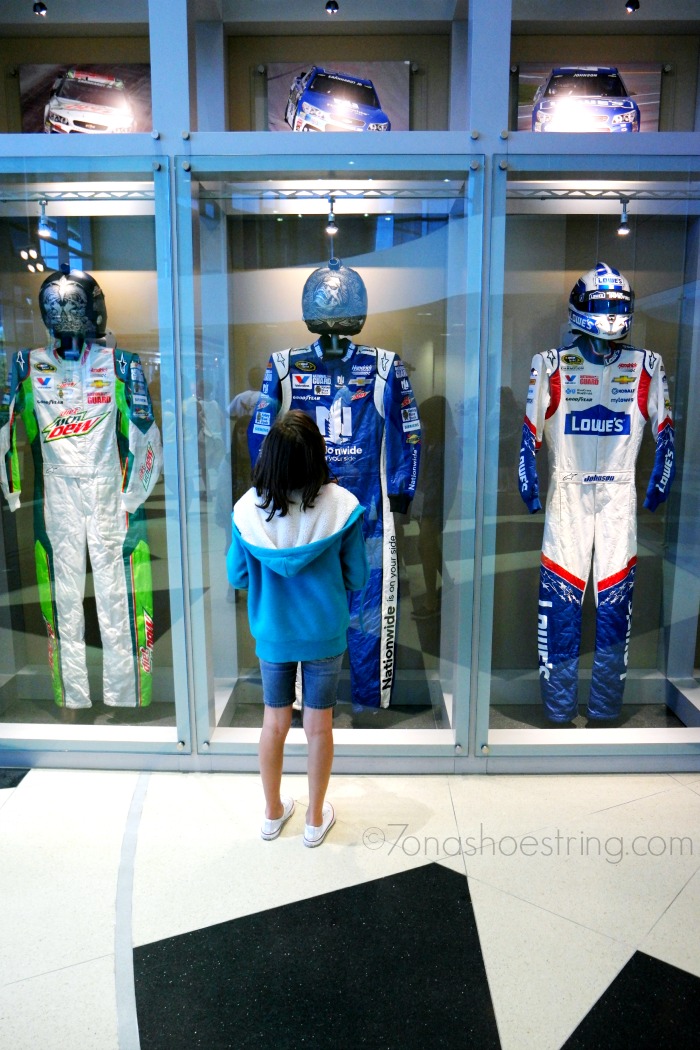 The four teams consist of the number 5, 24, 28 and 88 cars. Fortunately for us, we happen to be big fans of (at least) two of those drivers. 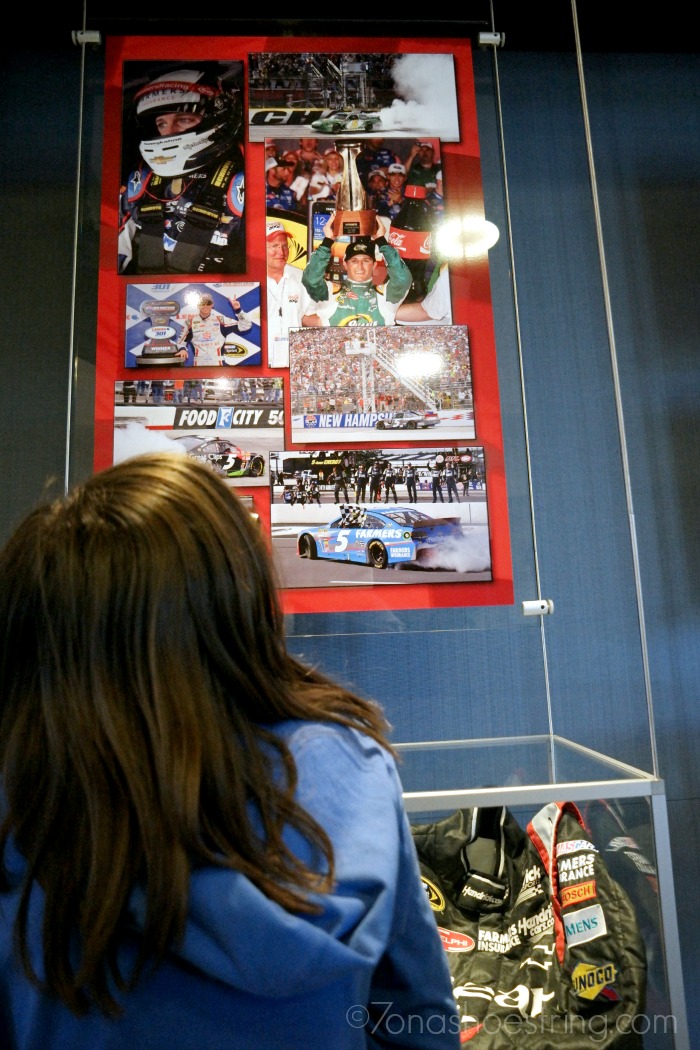 This only added to the excitement of being there, I’m sure. 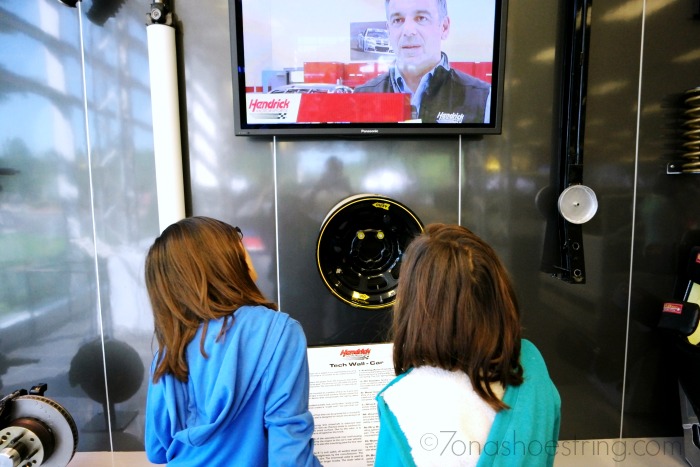 Nonetheless, they learned a thing or two. They studied the Tech Wall which featured various parts of the car. Everything from a manual transmission to an oil cooler and aluminum seats. Being able to see each of the parts and read about how they specifically worked while in a race car was incredibly valuable to them. To me. 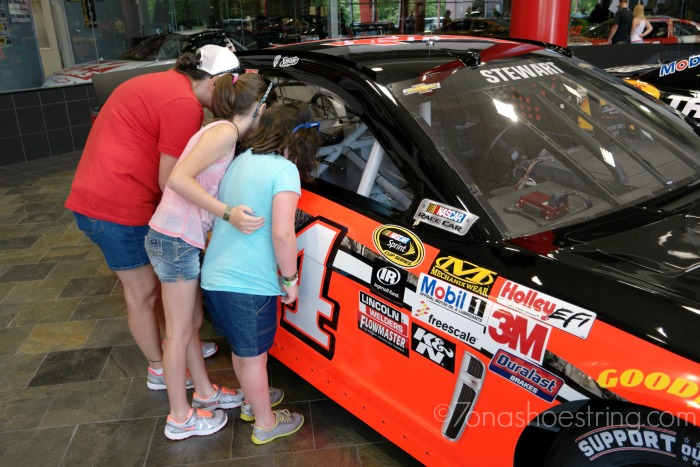 We walked through each area observing, reading and learning. Plus, since it was before the actual race, the girls were able to better understand the “behind-the-scenes” work that goes into racing. It’s much more than hopping into a car and hitting the gas pedal. 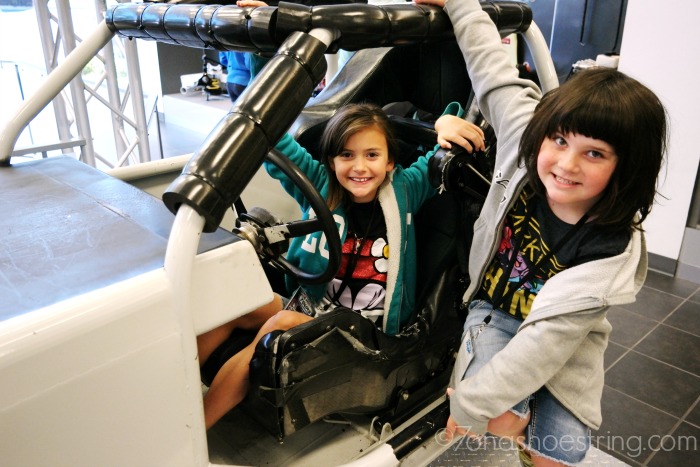 Oh, and those two drivers? There was probably no way they could not know who Dale Earnhardt Jr. was based on past conversations. We have been cheering him on for years. 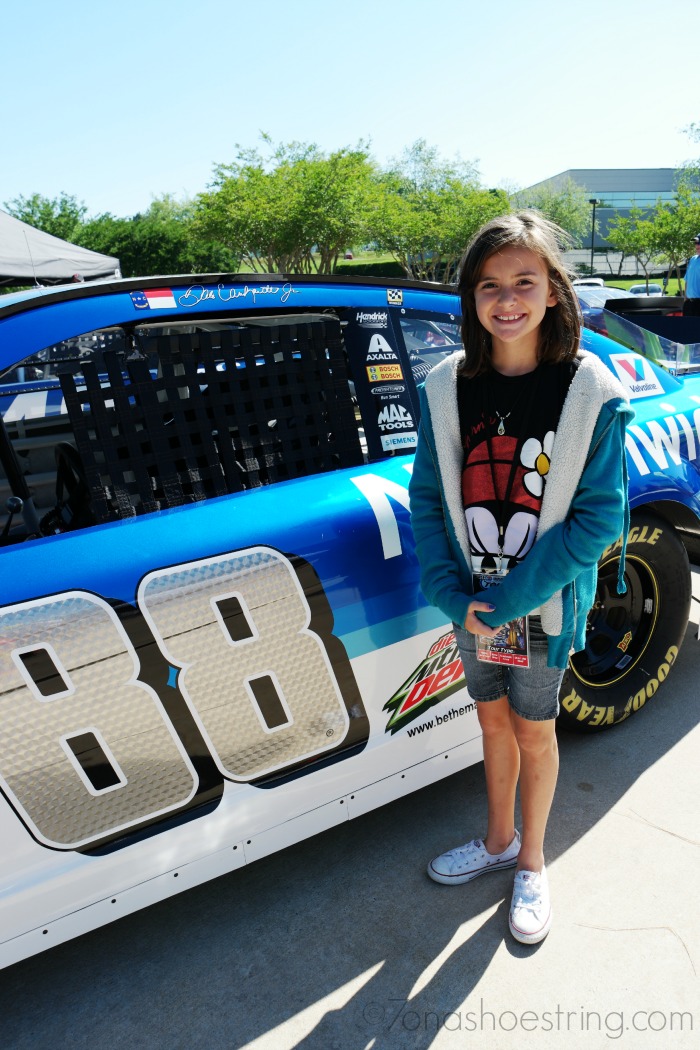 The next one was not much of a surprise. After all, there are some ways, even in NASCAR, where girls will still be girls. On that note, Kasey Kahne quickly shot to the top of the list of drivers the girls would follow throughout the weekend. 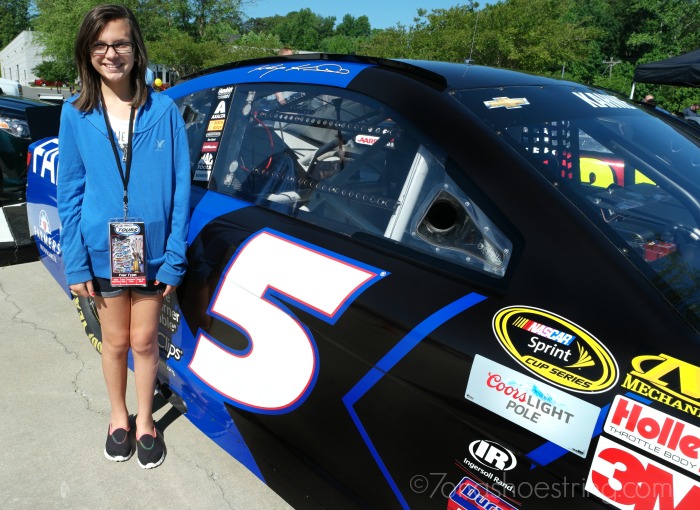 But, of course, there was no denying that the girls loved seeing Danica Patrick out there doing her thing! And as soon as we walked into Stewart-Haas Racing and saw her car there, it was pretty much everything. Again, just to reiterate, silly boys… NASCAR IS for girls! Yep. All that! 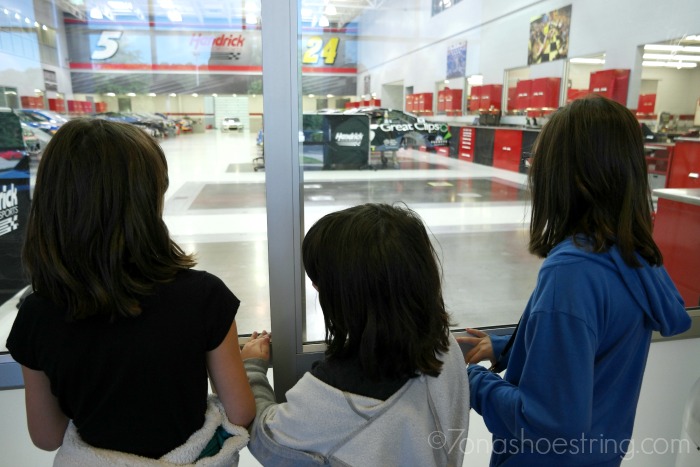 In addition to seeing the cars, trophies and other race memorabilia, we took a peak into the garages. We learned that Pit Crews train much like a football team. These teams really know what they are doing and it shows that practice makes perfect. They are typically in and out of those pits in less than 15-20 seconds. WOW! 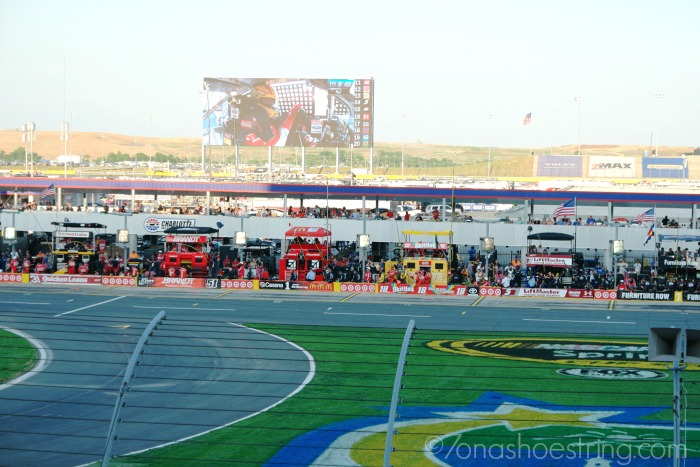 Not even the World of Outlaws STP Sprint Cup Series at The Dirt Track deterred the girls! Bring on the mud and dirt! They loved the experience and we had such a fun time. It brought back memories of when I attended similar races when I was a kid. You haven’t lived until you’ve had mud thrown at you from the track! Ha! 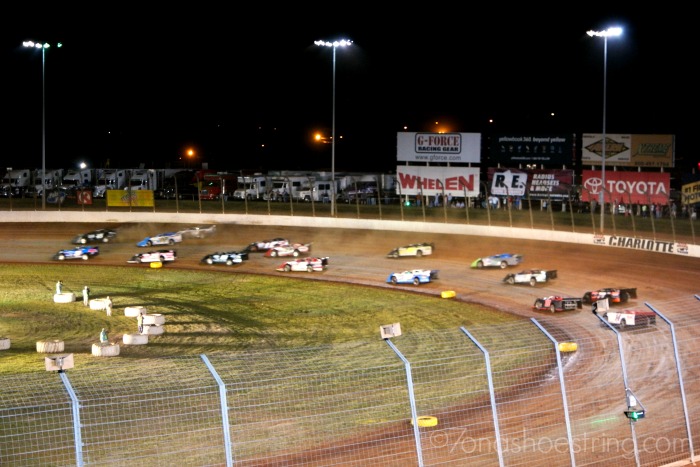 Our first afternoon race, the Hisense 300, was no match for the girls! More questions came as they watched and cheered. It was the perfect opportunity to better prepare them for what would happen the following day. We discussed NASCAR terminology, what the flags meant, and how the race would go the next day. 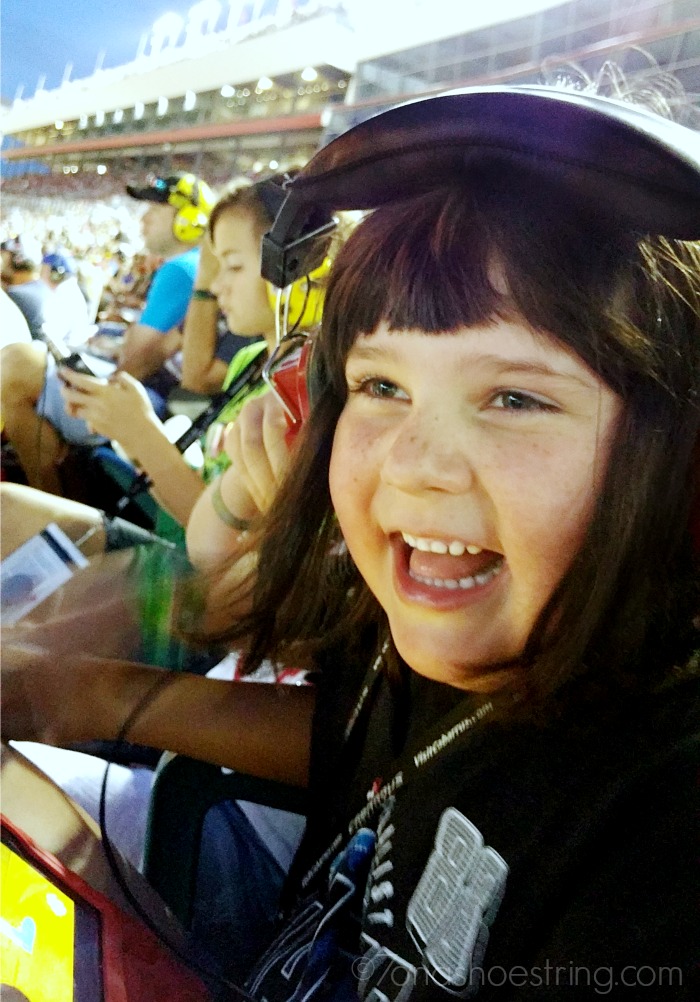 By the Coca-Cola 600 at Charlotte Motor Speedway on Sunday, they were more than ready to cheer on their favorite drivers. Armed with scanners, headphones and plenty of water and enthusiasm, they sat down and endured a full 8 hours of racing. No complaints. 1 bathroom break. Just NASCAR. All day. 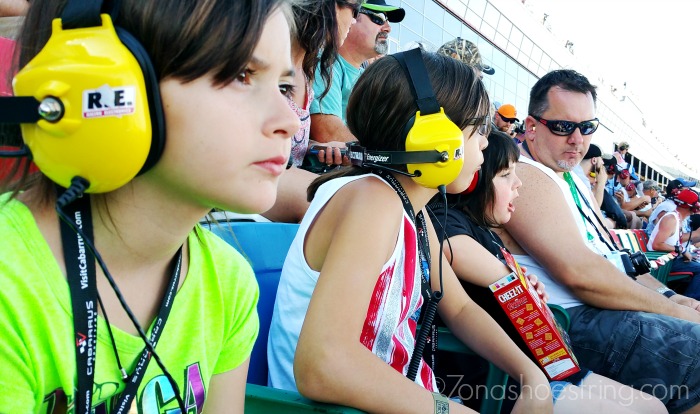 Seriously. They handled it like the superstars they are. Listening to the drivers on the scanner, watching the race, and simply asking a question or two along the way, I do believe they have a much better idea about the ways of NASCAR. Which is honestly exciting for me! It gives me three more people to share with and get excited about the latest driver news. 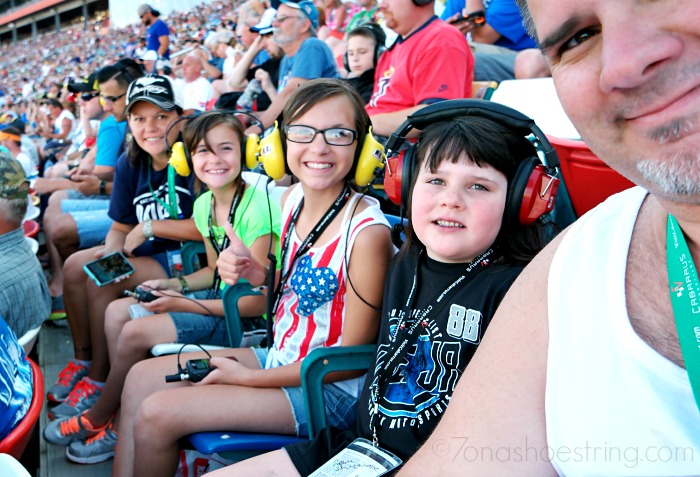 Did I mention how impressed I was with them? They absolutely loved the time we spent discovering everything NASCAR. Meeting Sam Bass (Official NASCAR artist), getting a look at the garages, climbing inside a racing seat, and taking a closer look at the sport of racing, I believe we can add each of them to the list of NASCAR fans! Watch out, Boys… the girls of the NASCAR community are here to stay!

Find out more about the tours, museums, eateries and more in the Concord, NC area by visiting WhereRacingLives.com and liking Visit Cabarrus on Facebook.