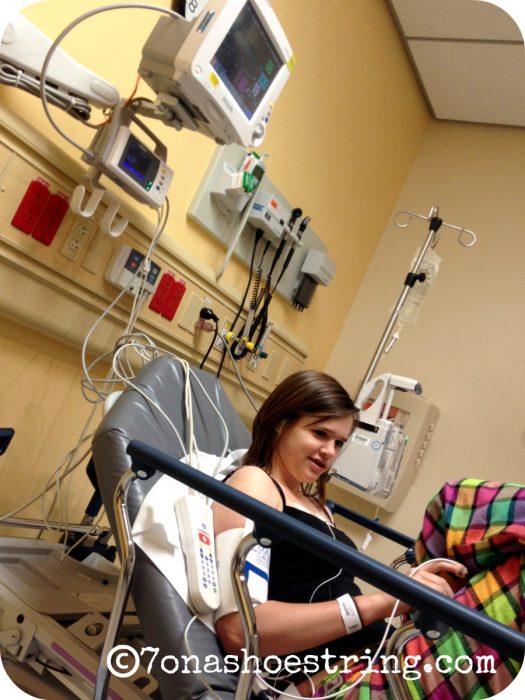 How ironic is it that on Friday, March 23rd, the day after World Water Day, I spent most of my day caring for my 16 year old daughter who was suffering from dangerous dehydration symptoms.

After going to bed around 4am, I was awoken at 4:30am from a tap on the shoulder. My oldest, Pepper, was standing beside my bed with her hands on her stomach complaining of a bad stomach ache.

I got up and went to look for the Pepto-Bismol but we were apparently out.

Still half asleep and trying to determine what to do for her, I told her to just come lay down with me. (Yes, being the cuddler she is, sometimes she just needs to be held.)

Around 8:15am I was wakened again. This time, she was standing beside my bed in tears telling me I had to take her to the emergency room. The pain was now in her lower back and traveling up to her right arm.

Of course, my immediate thought was her appendix. So, I got up and dressed quickly while Pepper woke up her brother to come watch Monkey so we could leave.

Before getting in the truck I had Pepper jump once to see if she doubled over in pain (I had just been told that the day before oddly enough), but she passed that test so I no longer thought appendix.

On the way to the hospital, her pain seem to elevate and her breathing became erratic and shallow. I was traveling as fast as I could to get to the hospital without putting us both in danger.

Once we arrived her walk had slowed and I was trying to stay with her but wanted to get inside quickly to get her registered and with a doctor.

Registration took 3 minutes and we were back in triage immediately afterwards. Within another 4 or 5 minutes we were in a room waiting on the doctor.

The nurse had asked Pepper if she thought she could use the restroom and gave us the standard “welcome” pee cup, as well as a strainer.

Fortunately the bathroom was right next to our room so it was a short walk. I accompanied her to the bathroom afraid to leave her alone. It was a good thing I did because she once again had severe cramps and began to feel lightheaded.

I told her we needed to get her back to the room and followed closely behind her. As I opened the door, she fell flat out onto the hard hallway floor so fast that her feet flew up and knocked my legs out from under me.

I caught myself on the door so I would not fall on her and had to find my shoe that was flung off. The nurse and doctor were in the hallway and helped to get her back to the room.

After checking her vitals, drawing blood, inserting an IV, and testing her ability to sit or stand… we discovered that we had to keep her in a flat, head down position or she would completely pass out.

At one point she was sitting up and began complaining of dizziness and being very warm. We fanned her and laid her back flat, but not before she passed out again. The pale white color of her face and lips, coupled with the blank stare and glassy eyes, made me think she had just stopped breathing.

My heart sank and I had never been so scared. After a deep breath she began talking again and the nurse told me to go call my husband in the hallway to just “take a minute.”

Eventually, both my husband and my mom joined us at the hospital. By the time they arrived she was halfway through her first bag of IV fluids and once again had color to her skin. She was soon able to sit up and no longer had to lay flat.

The doctor reported that there were no infections, no kidney stones, no appendix issues… none of that. But, there was something wrong and it was an easy fix… she was dehydrated and needed water! UGH!

After another bag of IV fluids we were able to leave. The doctor sat with us and thoroughly explained what had happened.

It appears that her pain was coming from her kidneys working hard to do their job but having nothing to work with. No water in her body, when we are normally made up mostly of water, meant the kidneys were working even harder with no end result.

Plus, no water also meant her brain was not able to get the necessary amount of blood to function. Therefore, since we are intelligently designed, her body would lay itself down {faint} so that it would not have to work so hard to get the blood it needed.

We spent the rest of the day and night pumping water into her. Her pain continued through the night and it took us until 1:00am on Saturday morning to convince her we did not need to go back to the hospital.

She just needed sleep and that proved to work by late Saturday afternoon. But, I cannot tell you how incredibly scary the entire situation was and how adamant I will be with noticing the signs of dehydration from now on.