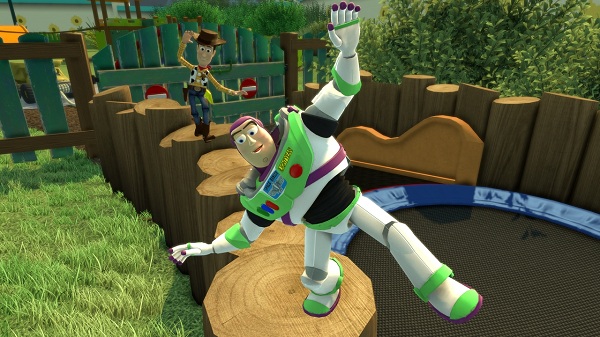 Have you ever wanted to become a Pixar character? In Kinect Rush: A Disney Pixar Adventure, you can do just that!

Before playing the game, you simply scan yourself using the Kinect and create a semi-personalized avatar. Your avatar is then sent off to Pixar Park where you meet up with other kids who introduce you to the stories of the game.

As you enter into each of the five different Disney/Pixar worlds, you are morphed into characters that best fit that world. For instance, you become a superhero in The Incredibles, a toy robot in Toy Story, and an explorer in Up.

The fun part is the engagement you are able to have with the onscreen characters as you make your way through the levels. You can also tackle the levels with a friend if you choose.

The game is well named considering it makes you get up and get moving: Kinect Rush: A Disney Pixar Adventure.

From the moment you are scanned into play, your arms and body are constantly moving. The Kinect Rush means just that… you will be using the Kinect to rush through the different adventures.

You will be running, jumping, grabbing things, throwing, climbing, rowing, flying and more. It keeps you going and on your toes.

For example, as you follow Violet through the world of The Incredibles, you will be performing superhero-type stunts and fighting villains with the family.

And then, once in Toy Story, you become a toy robot following Woody in an adventure through the day care. These two worlds were perhaps our favorites.

The non-stop action and already well-loved characters seem to really pull the kids into the play of the game.

As you enter Ratatouille world, you become a new character not in the original movie: Twitch. As you follow Remy through escapades in the kitchen, you will meet with a familiar nemesis such as Skinner.

Intricate movements and tight spaces will give you the feeling of being a small rodent making its way through Paris.

The last two adventures within the game are the Cars and Up worlds. Drafting behind Mater in Radiator Springs is fun and easy with your invisible steering wheel around the landscape.

Racing through the town and various adventures means more movement from you and more racing for your character.

Finally, the last world is Up. Your first task includes assisting Carl once again. His balloon-powered house is once again being carried away and you must help Russell catch the house by way of canoe. Get ready to row!

Kinect Rush is made to keep you active and that is does. Waving your arms, moving your body, running and jumping as you make your way through the adventures.

It is a new way to enjoy the Disney/Pixar worlds and the kids had a blast! This holiday season you can find Kinect Rush: A Disney Pixar Adventure.

Having recently been recognized with Silver Honors in the Parent’s Choice Awards Video Game category and received The National Parenting Center Seal of Approval for Fall 2012, you can be sure it is family friendly and fun for everyone!