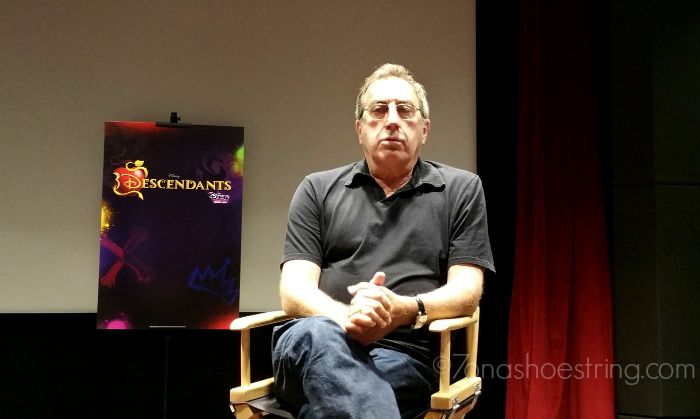 Kenny Ortega, Director of Disney Channel’s Descendants, looks for scripts based on a saying his mentor, Gene Kelly, often told him: “there needs to be a reason at the center of your ideas that motivates all of your work.” Personally, I agree that it’s a great perspective.

Therefore, with each script or pitch Kenny Ortega receives, he is looking for those things that move him. The ones that get him excited and give him a purpose and reason to get up and go to work every day.

“… when music and dance become part of the storytelling it’s fairly simple when you can turn a page and there’s a reason for it to exist. [P]art of my work is already accomplished… the characters go from here to here and this is what happens in between.”

What is truly incredible is how Kenny and his team were able to train these young actors to be astonishing dancers in such a short time period. He called it a “factory” on the set.

Three different rooms gave Kenny, his associate choreographer Paul Becker, and they rest of the team the ability to really push these teens. They had dance class, private tutoring, and even mentoring from the other dancers in the cast.

Basically, they were given a short course in dance and each one mastered it in no time. According to Ortega, they had “some brave kids working on this movie.”

Once you see Descendants, you will understand just how brave!

Fun fact about the film?

The original story was actually written as an action adventure comedy. There was no musical aspect to it. Disney Channels Worldwide’s President and Chief Creative Officer, Gary Marsh, then expressed how surprised he was to have Kenny there… with no music and dance involved.

“I’ll do it every day of my life given the chance.”

I mean, it’s what he is best at, right? So off Kenny went to create an arc for how he thought the music and dance might go in order to strengthen the story.

Together with Steve Vincent, the musical supervisor, he presented it to the executives and began the transitional process into a musical. There were composers and lyricists brought in.

Notes and notes… songs written. Even the choreography was collaborated and learned… all within three weeks!

Overall, Descendants is another amazing team effort. Mr. Ortega did say he has great trust and a relationship with Disney Channel, so he was given a “lot of freedom, a big voice and a lot of room to move.”

The end result is fabulous! Just take a look at what Dove Cameron and Cameron Boyce had to say about their roles:

“Filming ‘Descendants’ was some of the most fun that I’ve had in my entire life. It was the most incredible and magical cast and crew. Kenny Ortega is a genius. All of my costars are absolutely talented and magnificent, and everybody was handpicked so specifically. They’re all my heroes, and I really hope that we get to work more together.” -Dove Cameron (Mal)

“The experience was amazing. We worked with Kenny Ortega, and Vancouver, Canada is beautiful. We had a really great time, the cast was really close. We spent a lot of time together just hanging out, and we were a really tight knit group.” -Cameron Boyce (Carlos)

You don’t want to miss Descendants when it airs next week, July 31st at 7pm on Disney Channel.