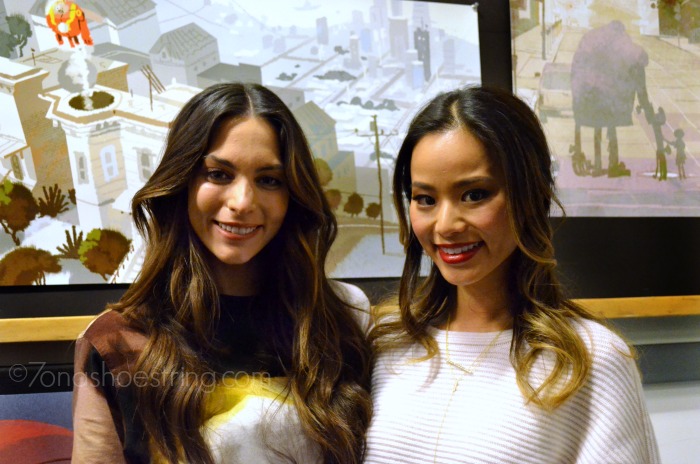 I am a big “lesson” type of gal. I believe there is typically a life application to be taught through events, books, movies… anything. So, of course, I asked Jamie Chung and Genesis Rodriguez how Big Hero 6 changed their perspective. I loved their answer!

Jamie Chung was definite and quick in her answer. Even though Big Hero 6 is considered a “superhero movie“, it stresses the importance of education and Science.

Not only that, but the movie shows us that intelligence knows no ethnic or gender boundaries. Everyone is equal and has the same opportunity to reach milestones in terms of education.

Plus, not only is this message relevant in today’s society, but it will still make sense to future generations.

As for Genesis Rodriguez, she was equally excited. As a self-proclaimed “official nerd” who was into robotics herself, Genesis was thrilled to see a movie that could encourage more girls into the field.

Big Hero 6 can inspire girls to be more interested in technology and want to be smart. They should not be afraid to be the first ones to raise their hands in class.

Most of all, they can see that being intelligent is empowering. At least this is Ms. Rodriguez’s desire.

That girls can learn from both her and Jamie Chung’s characters that robotics are cool. Science is cool. Being smart is a good thing.

In fact, Jamie Chung mentions her character being described to her as the Clint Eastwood of the group. Gogo Tomago may not have much to say, but when she does speak she is on point and full of sass.

GoGo is such a strong female character in the movie and is looked at as the leader of the team. Ms. Chung liked that not only did GoGo break stereotypes, but that all of the characters did.

The idea of being a nerd… and uncool… just was not true in the movie.

The Big Hero 6 team broke through each of those stereotypical boundaries and showed what teamwork and intelligence will get you.

And not just for GoGo Tomago, but Honey Lemon as well.

Speaking of Honey Lemon, I loved hearing her talk to Hiro in the movie.

When she said his name I instantly connected with her and could sense the love she had for this young boy. It was an endearing, genuine care for him.

When asked why Genesis chose to say his name that way, she spoke of the way she calls her manager.

She doesn’t simply say the name, she puts her Latin twist to his name giving it a more personal feeling.

The same for Hiro. Her love for him, as well as her Latina culture, are portrayed in one simple word. And it’s simply amazing how it adds another element to the story.

Both women mentioned being brought to tears as they watched the final cut of the film. I mean, how can you not cry?

Watching them interact with other during the interview was almost magical. Having only met a month before and never being together during the process of the movie, it seemed as though they had such a great connection.

They gave each other accolades and flowed through sentences seamlessly. One of my favorite parts of the interview was when Genesis Rodriguez totally gave up the best line in the movie… and it came from GoGo Tomago:

As a mother of 4 daughters and a strong-willed, independent woman myself, I kinda have to agree with her on that one!

Do you have a favorite between GoGo Tomago and Honey Lemon?