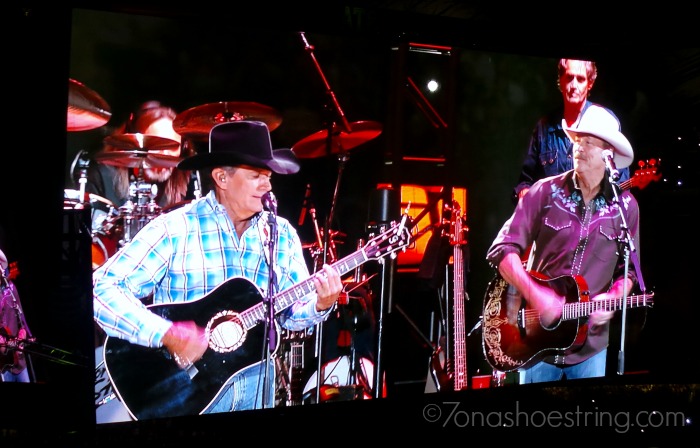 There are certain events in your life you will never forget. Your favorite birthday. Wedding day. Birth of your child(ren). You know, those kind of occasions. I can tell you, without a doubt, that June 7, 2014, will be one of those days for me. That day a dream came true… and I was able to see George Strait in the final concert of his Cowboy Rides Away Tour. 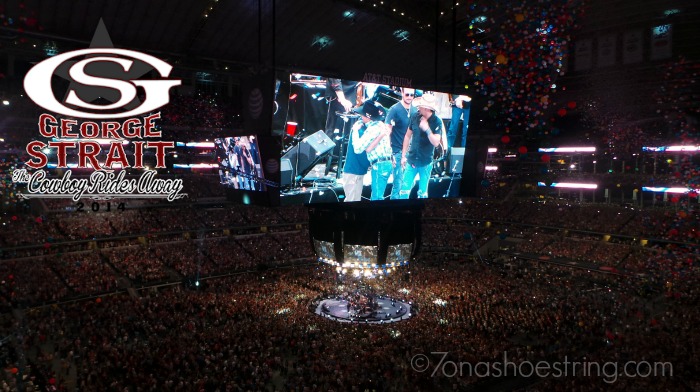 You can imagine the scene when I received the invitation from Verizon DFW. I thought I was reading wrong. I had a horrible day and then this happened. It was only weeks before the concert and any hopes of going where lost as far as I was concerned. So when I saw the words on my screen I literally FLEW out of my chair. Screamed with excitement and could barely get out the words to tell Colby what it was. Not since my very first press invite had I been so taken back with emotion. This was going to be be THE concert of the year and I was going to be there. 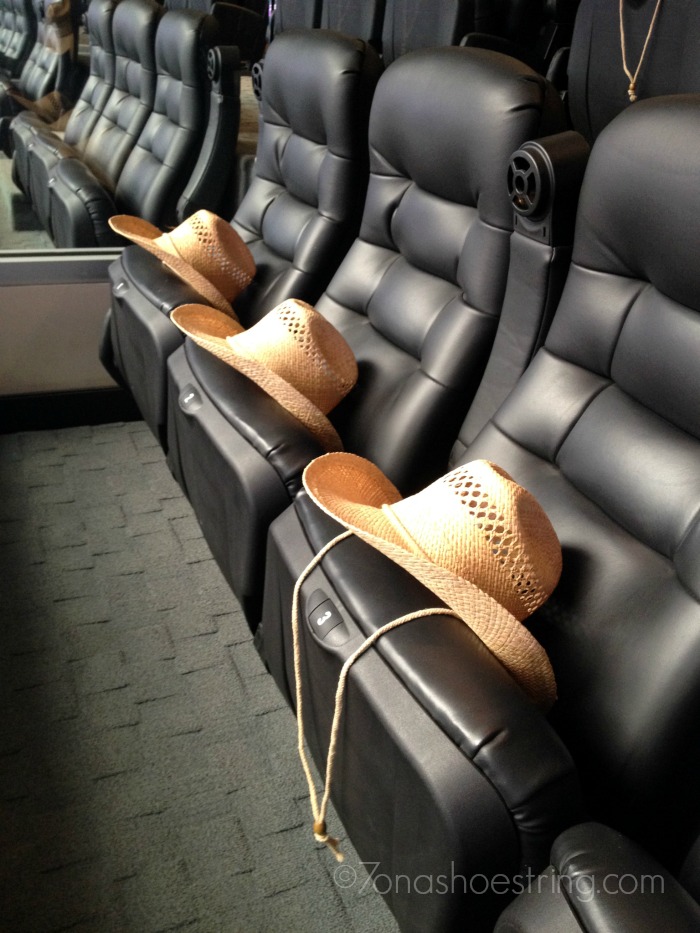 And it really was. 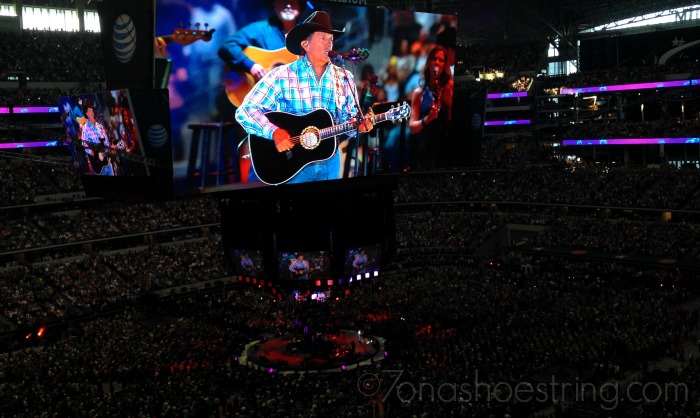 The concert at the “Stadium Formerly Known as Cowboy Stadium” set a new record for largest indoor concert in North America with 104,793 people. It was a packed house and the profound love for King George was overwhelming. 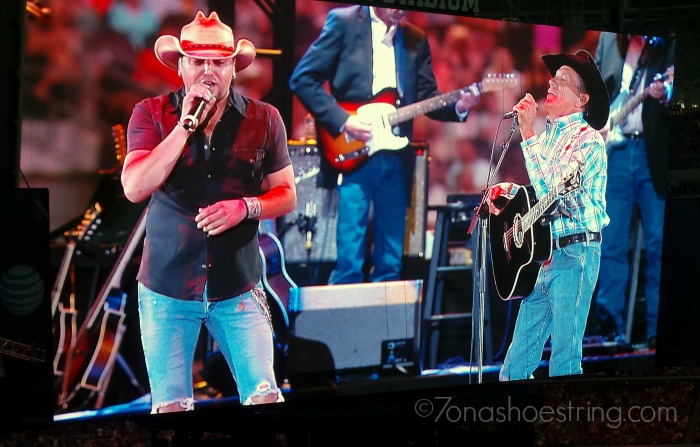 Asleep at the Wheel opened the concert and got the night started with a little Texas swing. Once the lights dimmed and the stage was set for the King himself to walk out on stage, the crowd erupted with cheers and the anticipation was exhilarating. Seeing the Texas cowboy walk out onto the red carpet that led to the stage was almost too much to handle. Tears welled up in my eyes and a huge smile came across my face. That smile is still there. The first sight of him on the stage was invigorating. 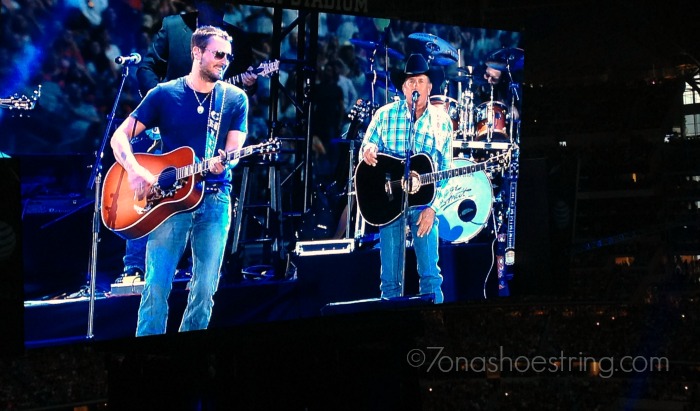 In fact, when he walked out on stage the every voice in that stadium was heard and I could not contain the emotions permeating through every one of my limbs. Goosebumps the size of Texas rose up on my arms and legs and I was sure my heart was beating out of my chest. This man is a legend and here I was, in the same arena with him, on his very last concert, of his very last tour. No words. Emotions overtook me. 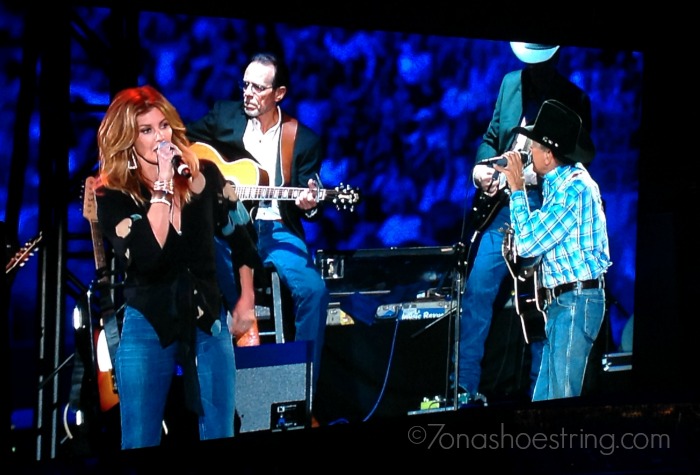 Those goosebumps remained for much of the concert. Every song brought back another memory of times past. George Strait was such an instrumental part of my adolescent years. He began his career in 1981. I was 7 years old and remember listening to him wearing my boots, Wrangler jeans, straw cowboy hat, and belt proudly displaying my name. Oh yeah, I was “country when country wasn’t cool“.

Most of his songs bring me back to days of old where I would go fishing on the river banks with my cousins with a boombox in tow. We would two-step into the night on an old concrete slab to songs such as “Marina del Ray” and “Amarillo by Morning.” Even his title song, “Cowboy Rides Away” holds a special memory as it was played at the funeral of an incredible young family member that lost his life at the age of 16. George Strait’s lyrics brought us solace as we put him to rest all those years ago. King George is more than a legend… he is a lifetime worth of memories. 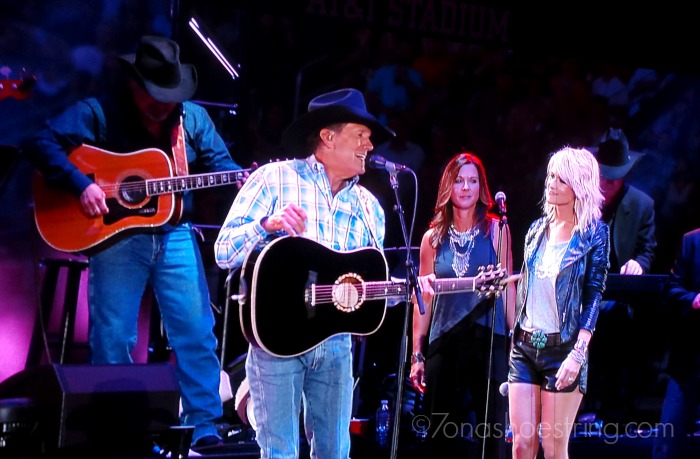 George Strait would not leave that stage for the next 3 hours. This 62 year old man played his heart out to the record-breaking crowd and had a great time doing so. His familiar smile and country twang only immersed each and every fan in attendance further into his world. The ability to sit still was overcome with the desire to two-step in the aisles, clap along to the beat, sway to the rhythm, or belt out each and every word to the songs of his 33 year career. 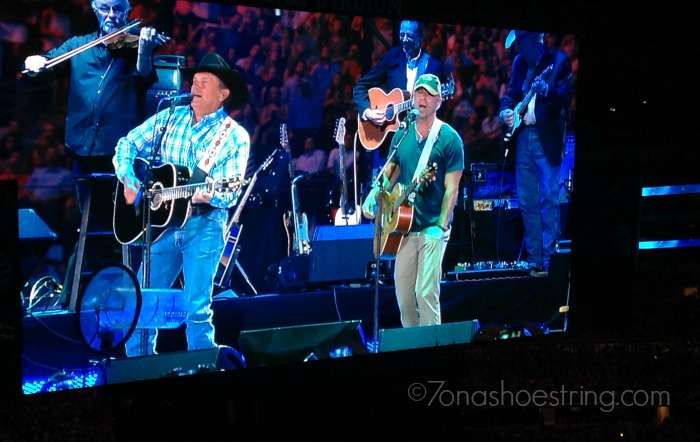 Take a look at the set list and see what memories are stirred up in you:

As well as the encore that featured all of his guests on the stage singing alongside him:

The superstar line-up represented a myriad of country music stars inspired by George Strait in some way or another, as well as career-long friends… and even his son, Bubba! It was a star-studded event not soon to be forgotten. The atmosphere and fact that King George himself was standing in front of you eloquently singing 41 songs in an unbridled once-in-a-lifetime concert… well, you just had to let it all go and enjoy the moment. (You can hear the whoops and hollers in the video below… the full last 7 minutes of the concert).

And that is exactly what we did. Every moment. Grateful hardly describes the words I have for Verizon in relation to the invitation. I have said “thank you” a hundred times but still do not feel that is enough! I was part of one of the most amazing history making events in country music. And that, my friends, is putting it lightly. Beyond measure. 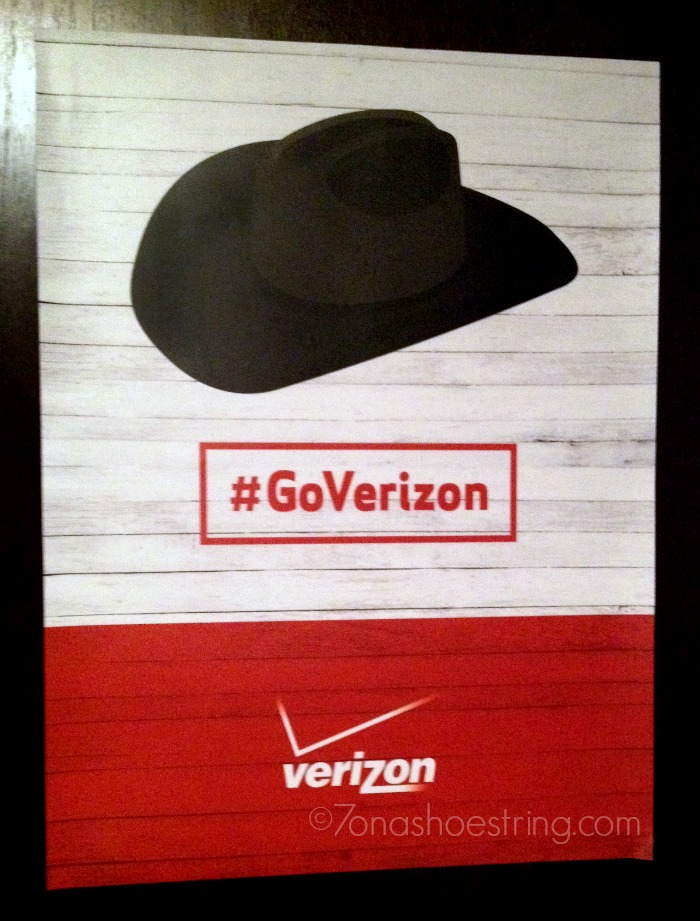 Bonus? Every picture, tweet, text, phone call, and even video I shared went straight out of “that stadium” without wavering or stalling. Why? Verizon Wireless. Ha!

Disclosure: A HUGE Texas-sized thank you to Verizon DFW for sponsoring the tickets for the concert, as well as food and drinks during the event. Regardless, all opinions and experiences were all my own.