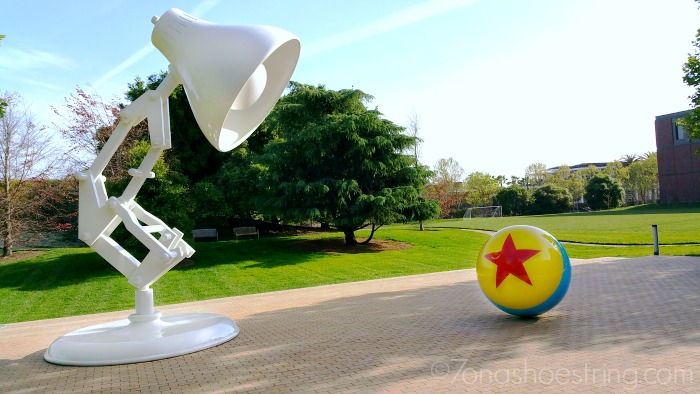 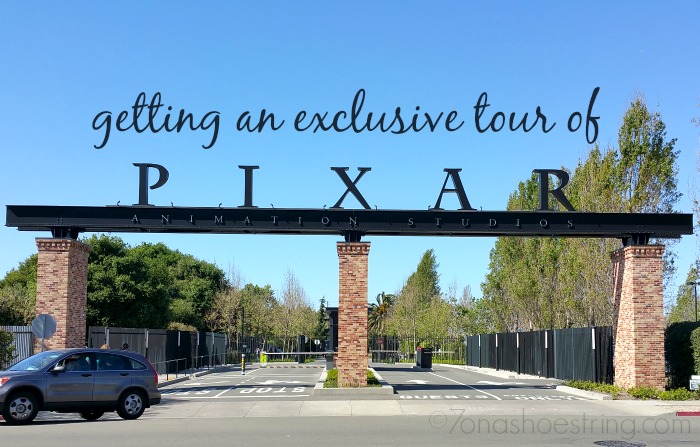 After driving through the majestic gates in Emeryville, California, you are led down a tree-lined walkway up to the main building: The Steve Jobs Building. Named after one of Pixar’s co-founders, Steve Jobs, it was designed by him and renamed a year after his death. The grounds cover 22 acres and the two-story building itself is 218,000 square feet. It is the heart of the campus.

Just out front, before stepping inside, you are greeted by the company mascot, Luxo Jr., and his iconic ball. At night, this large lamp lights the path for Pixar’s guests. Just beyond it, you will notice an amphitheater and further to the right a soccer field. 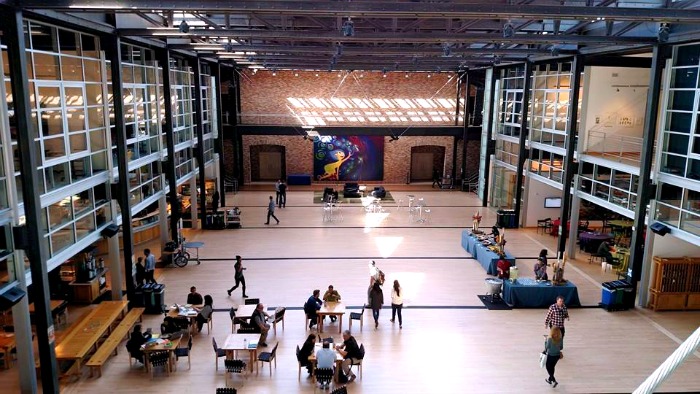 Once you open the doors of The Steve Jobs Building, you enter into the communal hub of the building. There was a lot of thought that went into both the design and construction of the building. One main feature was the idea of community. For example, the only bathrooms in the building are located within this area. This basically forces everyone out of their offices and into the large, open area with others. 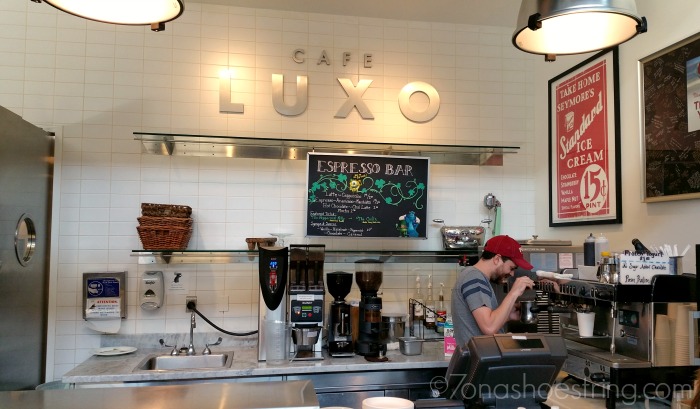 Once there, they can also grab a bite to eat at the cafe, top of their coffee cup, play a game, make a bowl of cereal at the free Cereal Bar, or pick up a t-shirt in the gift shop. In addition to the wood-fire pizza oven and burrito bar, there are delicious daily specials offered as well. Employees can enjoy a hot, tasty meal while reading their letters from the mail room. It’s a fabulous place for everyone to come together. 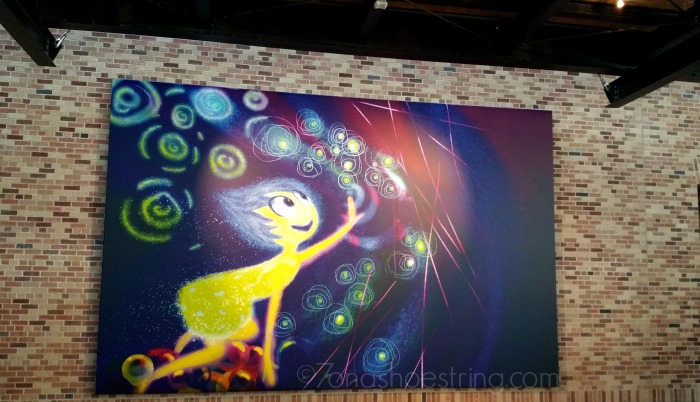 Art work from the most recent project adorn the walls and line gallery-filled hallways on the second floor. Drawings, clay sculptures, paintings and more give insight into the work behind the new project. 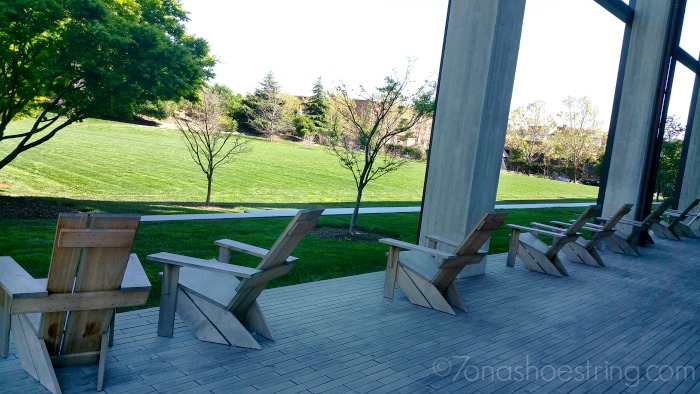 Once back outside, it’s a short walk to the building they call, Brooklyn. Side note: each of the buildings and areas of the grounds are named after New York locations. As you walk over, past the soccer field where lunchtime games are often played, you will spot the lap pool and volleyball area. Plus, under a cover of trees in a nice patch of green grass, there is a Pilates class going on. Pixar believes in fostering an active lifestyle and it is apparent as you walk the campus grounds. 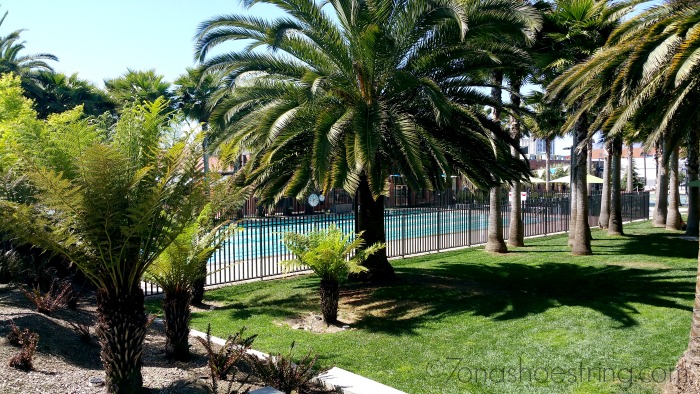 The Brooklyn building has a similar open concept, but we were not able to walk throughout it for a full tour. Actually, the Steve Jobs Building and Brooklyn were the only two buildings we were able to get an exclusive looks inside. Pixar is an active production company so there is always something going on that is not yet ready for audiences to catch a glimpse of. 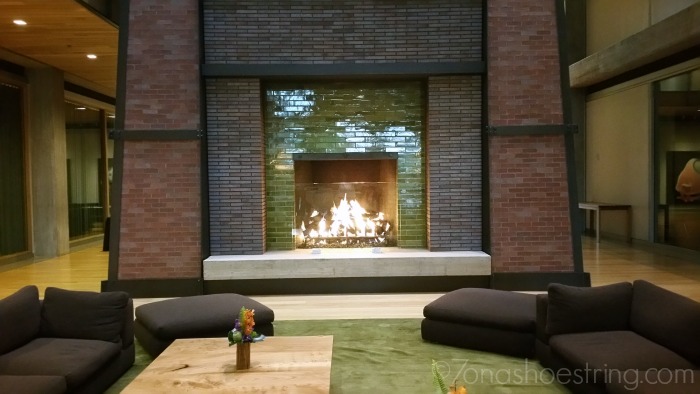 But when it’s ready to screen, you better believe you can get a glimpse at the campus itself. Inside The Steve Jobs Building, at the far end of the main foyer, you will find a theater. The sound is incredible and picture perfect. And once the lights begin to fade, guests will notice a night sky with stars shining brightly overhead. If you watch close enough, you will even catch a shooting star flying across the magical sky above. 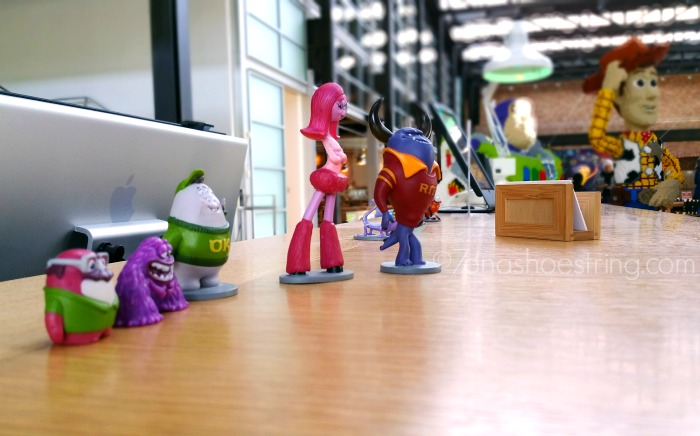 From the time we entered the gates of Pixar Studios until the moment we drove away, I was filled with excitement and delight. It was a fantastical place that fabulously portrayed the work that is created within its walls. I cannot wait to see Inside Out in its entirety this June after getting this exclusive tour and behind-the-scenes look.

Oh… and YES… look for those Easter Eggs!

Watch for more about Pixar’s Inside Out in the following weeks. And then watch for the movie to hit theaters on June 19th!