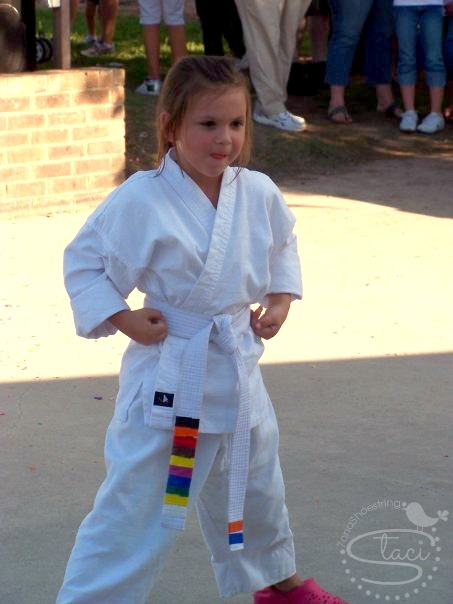 Do you have a daughter that plays sports? We have 4 daughters. I sometimes think I must be being punished for some reason.

I have been a tomboy my whole life and then I end up with 4 daughters. And 4 girly-girls at that. But, not too girly to plays sports.

Through our oldest daughter, I was a soccer mom early on. She was 4 years old when she began to play and her soccer games were the highlight of my week. It was fun to see her play… and do so well.

I was actively involved in every aspect of her playing. She was definitely tough on the field and was one of the best players on the team.

I promise that is not just mommy talking. She really was.

As she outgrew soccer, we grew larger in family size as well.

When I was pregnant with baby #5 (another girl), we decided to put the older three children into karate.

Again, our oldest daughter excelled. We were told she had one of the most powerful kicks in the class.

Our 9 year old was only 5 then. She loved karate. It was a place for her to get all the troubles of her kindergarten day out. I mean, that’s a tough grade, after all.

But, when we would watch her spar, with boys in the class, we knew this was for her. She did not let her slim size stop her. She was good at it and completely fearless.

There was no telling her that being a girl was going to slow her down.

Colby and I did all we could to continue to both encourage and empower her to do her best. She moved very quickly through the belt tests… catching up to her older sister and brother.

This is a sponsored conversation written by me on behalf of Verizon. The opinions and text are all mine.