Did you know Daisy Ridley was NOT a huge Star Wars fan before she landed the part of Rey in Star Wars: The Force Awakens? It’s okay though. I believe after we see her performance in the movie, all will be forgiven! She is definitely going to be a “force” to be reckoned with. (See what I did there?) 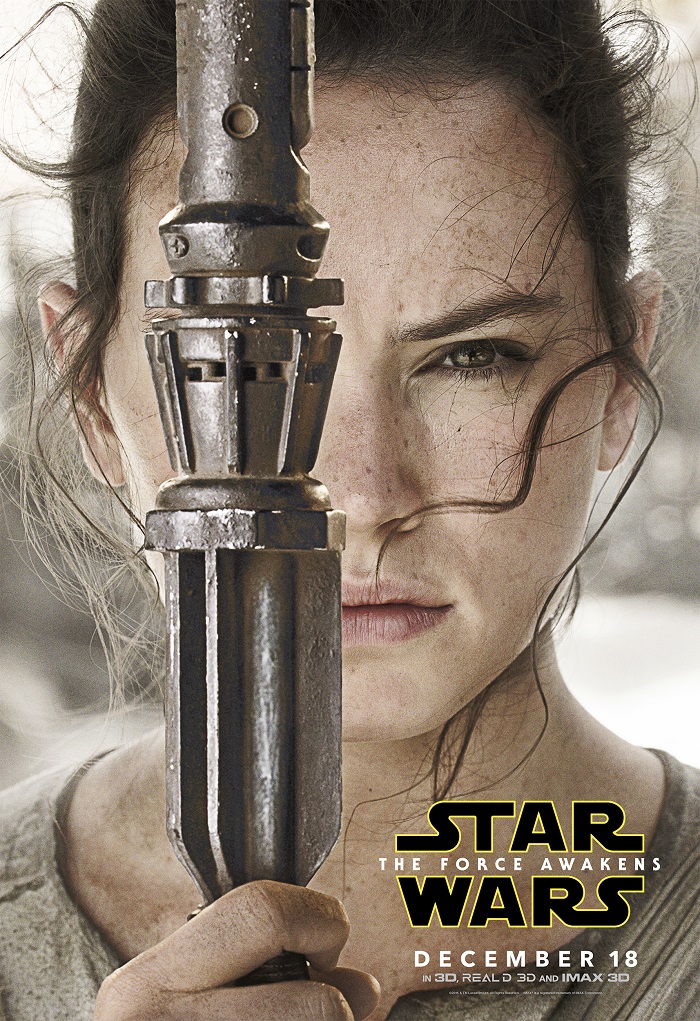 But, no worries, Ms. Ridley hopes that those people that “haven’t been able to relate so much before” can feel the same excitement she now feels about the movie. And “perhaps [will] feel like this is something that they can now come on board to if they haven’t already felt that.”

Personally, I know that my daughters are crazy excited to see Rey in Star Wars: The Force Awakens! Not that they weren’t excited before, but having such a strong female lead definitely has them more anxious.

Speaking of Rey, when we talked to Lucasfilm President and Producer, Kathleen Kennedy, she mentioned that girls would now have their own Luke Skywalker. That is pretty exciting news! But Daisy said she wasn’t really thinking of that during filming as that would have been overwhelming. Although, now, she can see both Leia and Luke in her character:

“She’s a pilot so there’s Han. And she’s a kick-[booty] woman, so there’s Leia. But, definitely the humble beginnings and an incredible story is the same as Luke. Obviously it’s very exciting that I’m a girl and that more people hopefully will be able to relate to this story because of that.”

So does Daisy find any similarities between Rey and herself? Of course, after all, she is the one playing her. By the way, Daisy Ridley is quite fond of herself as a person and I pretty much loved this about her. She believes everyone can be too hard on themselves and it’s “not celebrated enough that people can actually enjoy themselves.” Such a great perspective to have! With that, with all of the qualities Ms. Ridley may possess in small things, she thinks Rey has them in far greater amounts.

For example, Daisy feels as though she is “kind of brave” but Rey is far braver. Daisy likes to think she tries to do the right thing but, again, Rey far exceeds that. She also describes her character as “not polished and… not nuanced” and that’s perhaps why she’s “so brilliant and so relatable“. Basically, Daisy says Rey is “far more of anything” than she could ever be. Rey is

“open to everything that’s going around her, [and] even though it scares her, even though it makes her feel like she wants to run, she kind of plows on. So I hope I have those qualities.”

Who doesn’t want to be like Rey? As I mentioned before, my daughters are already huge fans. Therefore, I asked Ms. Ridley what her best takeaway from the film would be for young girls. Her response moved outside the realms of just the film:

“Rey, in her way, has lived a life and has wisdom probably beyond her years. And the thought of girls being able to relate to a character… that girls can’t find in films — so much of what they can physically see themselves in. They can’t follow a story sometimes if there’s nothing that’s representing them in the film… And I’m just an actress, I’m not changing the world. But to be part of something that is perhaps groundbreaking and to be part of a movement of women, not just in film, all over the world and all different sectors; That is an incredible thing.”

Finally, Daisy paralleled Rey with one of her favorite characters, Matilda.  She spoke about how Matilda found herself in a place that wasn’t fulfilling or emotionally giving her what she needed. She simply was not being appreciated in her situation.

Basically, Matilda was obviously in a family that didn’t do any of that to her and, similarly, Rey has no one. But… they both “go on a journey and of self discovery and push [themselves] beyond limits and meet people who bring the best out of them.” Those are strong parallels between both characters and ones she hopes to see others take from the movie. I can’t wait to see her performance and to watch it with my daughters.

Star Wars: The Force Awakens opens in theaters everywhere on Friday, December 18th. May the Force Be With You!