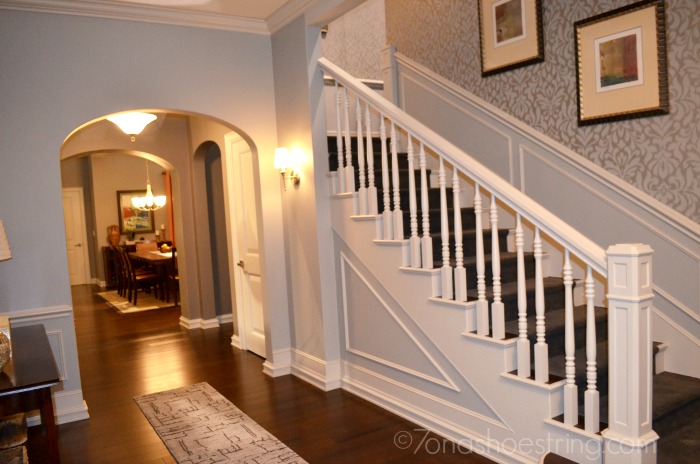 Have you tuned into ABC’s black-ish on Wednesday nights? The entire family will have you laughing and nodding your head in agreement. It’s one of those “sounds just like us” shows. At least for our family.

As I watch the show, I find myself giggling at the kids and pointing at the screen to say, “Yes! That’s so us.”

After watching each episode, walking through the set of their home was incredible. Being able to recall scenes that were played out in the very spot I stood was pretty amazing.

The “dead man walking” hall was probably the most recognized. Ha!

To begin with, the house is simply beautiful. The color palettes in each and every room were aesthetically pleasing and so well designed.

Even the kids rooms were a place I could see my own girls enjoying.

Jack and Diane’s room was perhaps my favorite. Fun and colorful with a perfect balance for the twins.

And Dre and Rainbow’s room? Wow. Not only did I love the colors and the layout, but it was inviting and comfortable.

The master bathroom isn’t an area you see too often on the show but definitely a nice haven for the parents.

In fact, Tracee Ellis Ross and Anthony Anderson often try to find the time to nap here while the others are busy.

The most amazing part? The closet! It’s a dream closet for sure.

Interestingly enough, most of the items found in the closet are Dre’s. He does have a fascination with shoes… and it shows.

Jr’s room was well-kept as well and I loved seeing all of the little details. The hallway shelves held books, toys and family board games.

The tables throughout the home featured knick-knacks full of character and color. Family pictures dawned the walls and there were big smiles all around.

As a fan, I appreciate the fact that several items came from stores you and I can shop at.

For example, stores such as Ikea, Target and West Elm. Some items come from the prop house so they show some age.

Not everything in a home is brand new all the time, and they want it to be realistic.

What is your favorite room in the black-ish home? Why?

Be sure to tune in Wednesday nights at 9:30/8:30c on the ABC Television Network for black-ish. Tonight, watch as Dre (Anthony Anderson) thinks Christmas has become commercialized and is all about “stuff,” and no one loves “stuff” more than his kids.

Pops and Ruby think they have forgotten the true meaning of Christmas and come up with a new plan to pare down gifts and spend more time together.

The kids don’t handle the news well and hope that if they put on their best behavior Dre and Bow will cave in.

Meanwhile, Daphne Lido (Wanda Sykes), who is single for her first holiday alone, invites herself to the Johnson family home to celebrate with them.