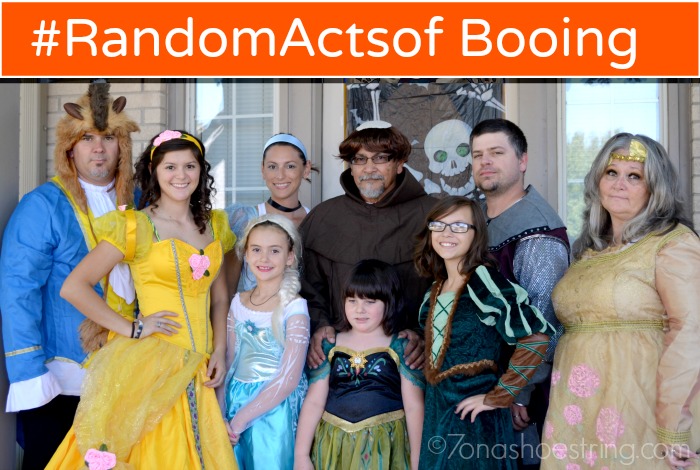 My dad has a huge heart for the homeless. From his desire to help others comes my own passion for it. As well as the empathy the rest of our family feels for helping the homeless, as well as others in need.

This was a big drive in our desire to perform #RandomActsofBooing in the streets of Downtown Dallas this past weekend… in our costumes from BuyCostumes.com.

Make Others’ Life Better in Costumes

Not only did we make our own “Life Better in a Costume” but we went out and made it better for others as well. We found all of the costumes, as well as the candy and gift bags, at BuyCostumes.com.

We had 13 people in our group and each one had a task to do. Together, we passed out 40 bags of candy that also included small treats, cheese crackers, cereal bars, and flavor packets for their accompanying bottle of water.

As well as a fruit pouch for an additional flavored treat and several more bottles of water to those who did not get a treat bag.

We have gone out several times before passing out food, drinks, clothes and toiletries, but never in costume. I wish I would have captured all the reactions we received.

Most of them came up as we were leaving to tell us thank you and to just look at the costumes. Many lamented on how they wished they had a camera to get a picture with Belle (she was our biggest hit of the day).

They also seemed to find solace in the Medieval Monk we brought along (and we could not believe my dad wore the costume… wig and all… before, during, and well after the event).

Truly, it touched us so much that we are already planning on going back next month… in our costumes. Plus, we are going to bring along a Polaroid camera so we can pass out pictures to those that want them!

Picking out the costumes was fascinating for me and my girls. We decided on a theme that would allow us to involve the most people and went with it.

Knowing that Disney Princesses are classics, we thought that most people would recognize them on the street. It turned out to be true! They loved seeing the Princesses walking up and down the road with their princes, knight in shining armor, monk, and even Beast.

I am not sure who was blessed more by the day’s events… the homeless or us.

Thanks, BuyCostumes for the inspiration!

Watch the video we put together and see just how fun it was for us!