With Star Wars: The Force Awakens opening this past month, you already know who INCREDIBLE of a year it was for Walt Disney Studios. Of course other blockbusters such as Inside Out and Bridge of Spies also added to the box office numbers. 2016 is looking as though it will be just as good… so hold on to your theater seat as we fly through the 2016 Walt Disney Studios Motion Pictures Slate.

A heroic action-thriller, “The Finest Hours” is the remarkable true story of the greatest small boat rescue in Coast Guard history. Presented in Digital 3D™ and IMAX® 3D, the film will transport audiences to the heart of the action, creating a fully-immersive cinematic experience on an epic scale.

Officer Judy Hopps (voice of Ginnifer Goodwin), the very first bunny on Zootopia‘s police force, jumps at the opportunity to crack her first case—even if it means partnering with fast-talking, scam-artist fox Nick Wilde (voice of Jason Bateman) to solve the mystery.

“The Jungle Book” is an all-new live-action epic adventure about Mowgli (newcomer Neel Sethi), a man-cub raised in the jungle by a family of wolves, who embarks on a captivating journey of self-discovery when he’s forced to abandon the only home he’s ever known.

When the government sets up a governing body to oversee the Avengers, the team splinters into two camps — one led by Steve Rogers and his desire for the Avengers to remain free to defend humanity without government interference, and the other following Tony Stark’s surprising decision to support government oversight and accountability in Captain America: Civil War.

Alice Through the Looking Glass (Walt Disney Studios) – May 27

In Disney’s “Alice Through the Looking Glass,” an all-new spectacular adventure featuring the unforgettable characters from Lewis Carroll’s beloved stories, Alice returns to the whimsical world of Underland and travels back in time to save the Mad Hatter. 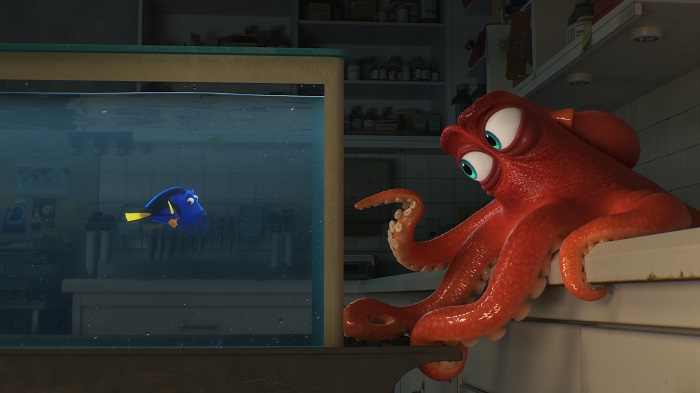 Disney•Pixar’s “Finding Dory” reunites everyone’s favorite forgetful blue tang, Dory, with her friends Nemo and Marlin on a search for answers about her past.

The talents of three of the world’s greatest storytellers – Roald Dahl, Walt Disney and Steven Spielberg – finally unite to bring Dahl’s beloved classic The BFG to life. Directed by Spielberg, Disney’s “The BFG” tells the imaginative story of a young girl and the Giant who introduces her to the wonders and perils of Giant Country.

A re-imagining of Disney’s cherished family film, “Pete’s Dragon” is the adventure of an orphaned boy named Pete and his best friend, Elliot, who just happens to be a dragon.

“Queen of Katwe” is the colorful true story of a young girl selling corn on the streets of rural Uganda whose world rapidly changes when she is introduced to a game of chess, and, as a result of support she receives from her family and community, is instilled with the confidence and determination she needs to pursue her dream of becoming an international chess champion.

Marvel’s “Doctor Strange” follows the story of neurosurgeon Doctor Stephen Stranger who, after a horrific car accident, discovers the hidden world of magic and alternate dimensions.

Walt Disney Animation Studios’ new big-screen adventure “Moana” is about a spirited teenager who, with help from demi-god Maui, sails out on a daring mission to prove herself a master wayfinder.

Lucasfilm’s Rogue One: A Star Wars Story, which takes place before the events of Star Wars: A New Hope, tells the story of resistance fighters who have united to steal plans to the dreaded Death Star.

DreamWorks Pictures’ “The Light Between the Oceans” is a heart-breaking drama about love, hate, moral dilemmas and the lengths to which one couple would go to see their dreams realized.

Which movies on the 2016 Walt Disney Studios Motion Pictures Slate are you most excited to see?